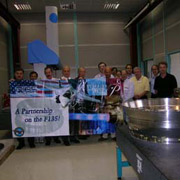 Piaggio Aero Industries announced that it has successfully delivered the first production standard Low Pressure Turbine (LPT) Case to Pratt & Whitney for use on the Joint Strike Fighter's (JSF) F135 propulsion system. This part also represents the first production hardware piece delivered by any Italian aerospace company for use in the JSF System Development and Demonstration (SDD) phase of program.
After an extensive evaluation Piaggio Aero was selected by Pratt & Whitney in September 2003 to be the supplier of F135 LPT case.

This first delivery follows almost two years of collaboration between the companies which included a joint manufacturing process development effort and the production by Piaggio Aero of three prototype parts to validate the set up of tooling, fixtures and process parameters. The part was delivered after the successful completion of the first article inspection phase which was performed by an appointed Pratt & Whitney Quality Assurance Representative.
The LPT case is scheduled for use on the second F135 flight test engine which is currently undergoing build at Pratt & Whitney’s Middletown, Connecticut facility. This engine will be delivered in early 2006 to support the JSF flight test program which will begin in August 2006 with the first flight of the JSF CTOL aircraft.

Piaggio Aero will manufacture close to twenty (20) F135 LPT cases during for the SDD phase of the program in preparation for the low rate initial and full rate production phases of the program. Over the life of the F135 engine program Piaggio Aero Industries is forecasted to deliver close to three thousand (3,000) LPT cases to Pratt & Whitney.

Pratt & Whitney also selected Piaggio Aero in November 2004 to be the supplier for bearing compartment housings and support structure in coordination with Pratt & Whitney’s North Berwick, Maine facility. All the parts are made of Nickel and Titanium based alloys which require a high level of precision machining. Production of the first bearing compartment parts has initiated and Piaggio is scheduled to begin deliveries starting in 2006.