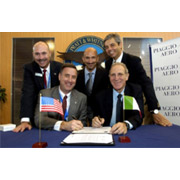 Piaggio Aero has signed a letter of intent with Pratt & Whitney, a unit of United Technologies Corp. (NYSE:UTX),for work on the F135 engine that will power the F-35 Joint Strike Fighter (JSF) "Lightning II."

The agreement, announced during a press conference at the Farnborough International Air Show, has a potential value of more than US$17 million over the life of the program.

Today's award is in addition to previous contracts between Pratt & Whitney and Piaggio Aero for engine hardware that brings the total value of F135 work placed to more than US$150 million.

"We are extremely pleased that we are able to extend our relationship with Piaggio Aero on the F135 engine," said Ed O'Donnell, director of F135 international programs for Pratt & Whitney. "We have seen first hand that Piaggio Aero has the high-technology, high-quality manufacturing capacities necessary to support this crucial work. Piaggio Aero meets these key requirements, while offering the affordability necessary to produce the best value for our customers."

Piaggio Aero is a part of the global F135 team that includes world-class aerospace companies representing all eight JSF partner nations. This agreement, along with previously awarded contracts, brings to total value of F135 manufacturing work placed with Italian companies to more than US$200 million.
“We are proud that Pratt&Whitney, one of the world’s leading aircraft engine manufacturers, would have extended his relationship with Piaggio Aero” said Mr.Josè Di Mase Piaggio Aero CEO “This demonstrates the enormous amount of confidence that the major world players of the aerospace industry have in Piaggio Aero that is the only company in the world to be successful active in both the areas of aircraft and aero-engines manufacturing. This agreement represents one more step forward toward the realization of a great industrial program that will guarantee Piaggio Aero Industries growth and new development”.

The technologically advanced F135 is an evolution of the highly successful F119 engine for the F-22 Raptor. Together the F135 and F119 will have logged approximately 800,000 flight hours before the F-35’s introduction into operational service in 2012. At 40,000 pounds of thrust, the F135 is the most powerful fighter engine ever built.
F135 ground test engines have accumulated more than 5,500 hours of testing as part of Pratt & Whitney System Development and Demonstration program. This is in addition to the more than 3,500 hours F135 engines accumulated as the exclusive power for all JSF concept demonstration ground and flight tests.

In December 2005, Pratt & Whitney delivered the first flight test F135 engine to Lockheed Martin in Fort Worth, Texas. The engine has since been installed and is ready to power the F-35's first flight this fall. The second flight test engine was delivered in June and the third is on track for delivery later this month.

The F135 propulsion system team consists of Pratt & Whitney, the prime contractor with responsibility for the main engine and system integration; Rolls-Royce of the United Kingdom, providing lift components for the STOVL F-35B; and Hamilton Sundstrand, provider of the F135’s control system, external accessories and gearbox.

Piaggio Aero Industries is the only company in the world to be active in the areas of aircraft (P180 Avanti II; P166 DP1) aero-engines and aerostructures manufacturing. Technology and commitment in research and development, along with innovative design solutions, are the drivers for Piaggio Aero Industries’ current and planned future programs.

Pratt & Whitney is a world leader in the design, manufacture and service of aircraft engines, space propulsion systems and industrial gas turbines. United Technologies provides high-technology products and services to the aerospace and building industries.