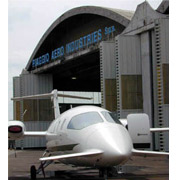 Genoa, October 2nd, 2005: Piaggio Aero industries has been recognized as a “Design Organization” by the European Aviation Safety Agency (EASA), as of September 29, 2005.

The approval, gained after a long and demanding examination of the company by the National Agency for the Italian Civil Aviation (ENAC), recognizes Piaggio Aero Industries as being suitable to operate independently on its products as they apply to the security characteristics required by the European Aviation Safety Agency.

The gaining of the DOA certification from the European Authorities confirms the effectiveness of Research and Development carried out by Piaggio Aero on its products and on its industrial processes. The certification by the European Authorities as an Aircraft Firm puts Piaggio Aero Industries amongst the most important international aircraft builders.