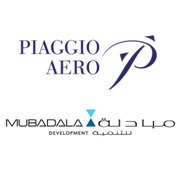 19th April 2006 - Genoa, Italy: - Piaggio Aero Industries S.p.A., one of the world?s leading aerospace companies, today announced that Mubadala Development, a principal investment company wholly owned by the Government of Abu Dhabi, has acquired 35% of the equity of Piaggio Aero.

The transaction is founded on a shared belief by the two parties that the business aviation segment will continue to expand significantly over the foreseeable future. The share capital resulting from the deal positions Piaggio Aero to harness that opportunity. Piaggio Aero Industries is the only company in the world to be active in all aspects of aircraft manufacture and maintenance - aircraft, aero-engines and aerostructures. Since 1998, the company has grown its order book from one plane to its current order book of over 100 planes. The Company?s total order book is currently valued at more than $820 million.

We are honoured that Mubadala Development has chosen to invest in Piaggio Aero. ?Said Mr. Piero Ferrari, Chairman of Piaggio Aero S.p.A.. ?We have had extraordinary success in both the European and North American business aviation markets. This deal places us in a position to further grow our position in those markets whilst beginning to explore new markets, including the Middle East, Far East and South America - each of which offers high potential for sales. Having known Mubadala for some time and seen their capabilities, we are convinced that they will be a very sound partner. In short, this new strategic alliance between Piaggio Aero and Mubadala opens enormous possibilities for our business.? He added.

Commenting on the deal, Khaldoon Al Mubarak, CEO of Mubadala Development said: ?For us this investment makes commercial sense on two levels. As a straight investment opportunity Piaggio Aero has a remarkable performance track record. Importantly, the transaction also offers the opportunity to explore potential synergies that both Piaggio and Mubadala can leverage?.

?We are very excited about our new partner and honored for the confidence Mubadala has placed in Piaggio Aero? said Josè di Mase CEO of Piaggio Aero. ?For us this new partnership represents yet another significant development step. We are heavily engaged in strategic planning for our industrial and commercial development and this new partnership allows us to build on our success of recent years through increased production and financial consolidation?.

Mubadala Development?s investment involves the purchase of existing shares and new shares. Piaggio Aero?s primary shareholders are the Ferrari and di Mase families. As a result of the transaction they will now hold 55% of the share capital of the Company. Together with Mubadala?s 35% stake, this accounts for 90% of the share capital of the Company. The other ten percent is held by a mixture of banks and other shareholders.

?Mubadala Development is the best possible partner for Piaggio Aero. ?Said Mr. Alberto Galassi, a member of the Board of Directors and the Executive Committee of Piaggio Aero Industries. ?They are a highly sophisticated and selective investor and it is an honor for us to be a part of their development portfolio. We look forward to what we know will be a proactive contribution to the Board and Executive Management Committee?. He added.

Piaggio Aero has shipped a combined total of almost 110 of its ?Avanti? and ?Avanti II? planes, to customers around the world. Customers include private owners, corporations, governments, military institutions and fractional ownership companies. In 2006, the Company plans to deliver 24 of its signature P180 Avanti II planes. As Piaggio Aero?s flagship the P 180 Avanti II is the fastest and most efficient turboprop aircraft in the World, competing successfully in the light jet segment.