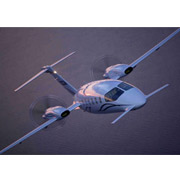 Geneva 21th May 2007 - Piaggio Aero Industries S.p.A. and Jetfly, the first European - based fractional ownership company, today announced at EBACE the agreement contract that calls for 4 P.180 Avanti II aircraft to be delivered in 2008.

The 4 P180 Avanti II were selected by Jetfly over Piaggio Aero’s competitors thanks to their unmatched operational flexibility, cost efficiency and performance and they will join the fractional operator’s existing fleet of the latest generation aircraft belonging to more than eighty co-owners.

“This order has been made necessary to Jetfly to pursue its successful development in the first European program in fractional ownership of business turboprops, and to match the increasing needs of entrepreneurs and individuals for their professional or private travels to fly higher, further and faster, at a reasonable cost” said Jacques Lemaigre du Breuil,head of Jetfly.

“We are delighted that Jetfly has chosen 4 P.180 Avanti II as they have proved to be the best choice between the aircraft of their class in terms of performance, space and comfort.” declared Josè Di Mase, Piaggio Aero CEO. “The Avanti II is designed to achieve high utilization and efficient turnaround times which contribute to lower operating costs so the P.180 is ideally made for the fractional ownership market. We provide an attractive alternative for existing executive jets, but also bring the best  executive travel experience. We are glad to offer the Avanti II as the right airplane for Jetfly co-owners”.

The Piaggio Aero P.180 Avanti II offers the speed of a light jet aircraft, the comfort of a large, quiet, midsize and real stand up cabin, and fuel efficiencies that are nearly 40% higher than most business jets. The maximum take-off weight (MTOW) of 12,100 lbs gives the P180 Avanti II greater payload range and the introduction of the updated engines (P&WC PT6A-66B) providing higher performance, faster cruise speeds and more efficient operation making the Avanti II the most up-to-date and fastest turboprop in production competing successfully in the light jet segment.

The P180 Avanti II features the fully digital, automatic flight control and displays of the latest generation “Pro Line 21” avionics system, the most advanced on the market today which provides the pilot with better situational awareness, resulting in even higher levels of safety, efficiency, and reliability. The Avanti II offers the largest and most comfortable cabin environment of any aircraft in it’s class and provides passengers with ample room to stand-up comfortably. The rich appointments found in the Avanti II cabin assure travel in luxurious comfort .

Thanks to this acquisition, Jetfly co-owners will enjoy the P.180 Avanti II’s exhilarating performance and exceptional comfort, while flying with confidence of Piaggio Aero proven technologies and unrivalled design.

Jetfly
Jetfly, an established company, based in Luxembourg, founded in 1999 by Jacques Lemaigre du Breuil, is the first European program in fractional ownership of business turboprops. It operates a fleet of the latest generation aircraft, on behalf or more than eighty co-owners who have chosen, for their convenience and liberty, the safety, the comfort, the flexibility and the exceptional cost-efficiency ratio of this personal air transport system.

P.180 Avanti II
The P180 Avanti II, equipped with the new Rockwell Collins Pro-Line 21 avionics and currently in production, enables great performance in terms of cruising speed and a high loading capacity which, together with its brilliant performance and futuristic design, makes it the fastest and most advanced executive turboprop in the world. The P180 Avanti II has an endurance of over 1,700 miles at a speed of 400 kts  and a maximum cruising altitude of 41,000ft. Its overall performance is similar to that of a Jet but with 30% less operating costs. Moreover with a height of 69” and depth of 73”, the P180 offers passengers a level of comfort matching only that of bigger and more costly aircraft.