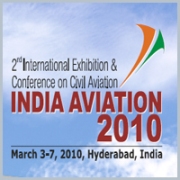 Piaggio Aero in partnership with Taj Air will display its P180 Avanti II executive aircraft at the second edition of  India Aviation 2010 which takes place from the 3 to 7 March 2010 at the Begumpet Airport Sardar Patel Road, Hyderabad., India.

After the grand success of the first edition of India Aviation Expo 2008, India Aviation 2010 is expected to be a show successful. The Indian Aviation Sector offers excellent business opportunities for aviation companies to do business in India.

India is gradually becoming a focal point in the global aviation map with the growing air traffic (passenger and cargo), route expansion, followed by major airport infrastructure developments. It is estimated that India would be the world's fastest growing aviation market over the next 20 years

The partnership between Piaggio Aero and Taj Air represents a long-term commitment to satisfying  Piaggio Aero  customers by offering a professional Avanti II aircraft dealer network, a convenient and efficient aircraft support and first class services. The establishment of the Avanti II service center is at the Taj Air  Main facility located  at the Mumbai International Airport. Taj Air is part of Tata Group which participates also in Piaggio Aero Industries S.p.A. Tata Limited, a U.K based subsidiary of Tata Sons, has been representing Tata Sons in Europe since 1907 acquired in October 2008  approximately one third stake of Piaggio Aero Industries S.p.A. becoming  one of the primary shareholders, alongside Ferrari and Di Mase families and Mubadala Development Company. The investment was  founded on a shared belief by Tata Limited and the other Piaggio Aero shareholders that the business aviation market will continue to expand significantly on the Indian and international markets.

Taj Air and Piaggio Aero display at India Aviation 2010 the P180 Avanti II aircraft, the largest and most comfortable cabin environment of any aircraft in its class.

The Piaggio Aero P.180 Avanti II is the only business aircraft with the speed of a jet and the economics of a turboprop. In terms of outright fuel efficiency, lowering operating costs without sacrificing performance or environmental responsibility and less fuel burn means lower carbon emissions. That's good for the environment. When it comes to green, no other plane save so much. It offers the speed of a light jet aircraft, a large, quiet, enormous  cabin and fuel savings that are nearly 40 per cent higher than most business jets.

The P180 Avanti II is the culmination of efforts by engineers to design, without compromise, an aircraft to meet the objectives of jet-like speed, a wide body, stand-up cabin and turboprop efficiency. The mean feature of the Avanti II is the  patented three-lifting-surface configuration, which permits a 34-per-cent reduction in total wing area over conventional designs, together with a non-cylindrical, low-drag fuselage shape. And while the aircraft’s surface appearance may look very different to what the industry is accustomed to, Piaggio Aero  has been quick to assure users that both pilots and maintenance engineers will find much onboard that is familiar, including well-known and widely used control systems, 95 per cent aluminium construction and conventional flight controls. It is equipped with a fully digital, automatic flight control and displays the latest generation Rockwell Collins ‘Pro Line 21’ avionics system, the most advanced on the market today.

The P.180 Avanti II  is powered by two Pratt & Whitney PT6-66B engines which  take the plane to a certified altitude of 41,000 feet (12.500 mt) and incredible  speed of 402 kts (745 km/h) with a maximum operating mach of 0.7. With a maximum range of 1,600 nautical miles, the Avanti II can complete al mid-range missions non-stop that would take some other turboprops one or two stops, while its ability to take off and land at smaller airfields allows greater flexibility in destination.