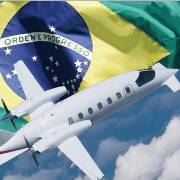 Piaggio Aero and Algar Group jointly announced today that Algar Aviation has become the exclusive distributor of Piaggio Aero for the sales and service of the Piaggio P 180 Avanti II aircraft in Brazil.

Algar Aviation, part of the Algar Group, already represents TBM in the country, and commence their partnership with the Italian brand Piaggio Aero by presenting the P.180 Avanti II aircraft at LABACE 2011, which is being held between August 11th and 13th in São Paulo, Brazil.

With a unique, contemporary and bold design, the Piaggio Aero P 180 Avanti II is the fastest and the most advanced twin-engine turboprop in the world. The aircraft, which can carry up to nine passengers, is capable of flying at a maximum speed of 402 kts, 745 km / h. It has a range of more than 2,700 kilometers and can fly up to a flight ceiling of 41,000 feet. The full stand up cabin is the most spacious, comfortable and quiet in its class.

The Piaggio P180 Avanti II has twin-turboprop Pratt & Whitney Canada engines that are well known and supported in Brazil. They provide superior performance and fuel economy that deliver low operating costs and give up to 40% reduction in fuel consume when compared to similar aircraft. This in turn also means 40% less carbon emissions, making the aircraft environmentally friendly with a true green focus. The aircraft, due to its incredible aerodynamic design and overall capability is able to operate from shorter runways that many aircraft, both commercial and private are unable to fly to.

As well as its contemporary design the aircraft is able to offer many sophisticated and personalized on board options such as access to broadband internet, map systems, cell telephone, full reclining seats as well as a broad portfolio of customized options at customers request.

Algar Aviation, who provides aircraft maintenance, charter and sales, increased their business by 137% in 2010 when compared to 2009. “2010 reflected the improvement in the aviation industry after a period of financial crisis. The expectation for 2011 is that the performance will be even better in Brazil”, said Rogério Montalvão, CEO of Algar Services.

Commenting on the appointment of Algar as the official Piaggio Aero distributor for Brazil, Piaggio Aero Chief Executive Officer Alberto Galassi said,” We are very proud to be associated with such a renowned Brazilian group as Algar. They have a wonderful reputation and are passionate about their business and the quality of service they provide to their customers. Without doubt they will develop and grow the Piaggio Aero business in Brazil very quickly and, create great awareness of what an ideal aircraft the P180 Avanti II is for this key South American market” Besides the sale of Piaggio Aero aircraft, Algar Aviation will also be responsible for the maintenance of all Piaggio P 180 Avanti II in Brazil, from their facilities in Uberlandia and Belo Horizonte.
Today, they maintain more than 200 aircraft of various makes at these two fully equipped maintenance centers.