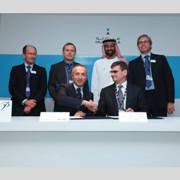 Piaggio Aero is proud to announce at the Dubai Air Show the delivery of the first P.180 Avanti II aircraft to JSC FIS, the Russian company which provides Flight Inspection and calibration services.

JSC FIS and Piaggio Aero have also jointly announced the signing of new contract for 5 more P.180 Avanti II “Flight Inspection” aircraft to be delivered from 2012.

Flight Inspections and Systems has a 100% share of the aviation work on flight inspections in the civil airdromes of the Russian Federation.

Mr. Alberto Galassi, CEO of Piaggio Aero declared “We are delighted to begin Piaggio Aero’s partnership and cooperation with the Flight Inspections and Systems company whose work is so essential to the strategic developments of Russian aviation sector .

This first delivery, which is the result of an intensive evaluation process, confirms how well suited the P.180 Avanti II Flight Inspection is to the rigorous requirements of Russian flight calibration missions”.

This performance while similar to a jet returns 40 % lower fuel consumption with greater operational efficiency and much lower CO2 emissions into the atmosphere. The aircraft is also certified for rapid landing procedures, an essential factor in missions for radio measurement and the calibration of airport control systems.

The P180 Avanti II FI is equipped with latest state of the art Flight Inspection and calibration system; the aircraft guarantees measurement and control of the following system operating capacities: