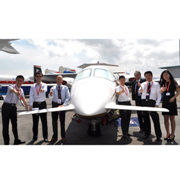 Piaggio Aero and CAEA Aviation are participating together at the 2012 Asian Business Aviation Conference and Exhibition as the Chinese Group has been appointed as the Exclusive Sales Agent for Piaggio Aero P.180 Avanti II aircraft in mainland China.

The two companies have also announced that the delivery of the first two P180 Avanti II aircraft will take place next July, when the first of the Piaggio Aero aircraft registered in China will land in Beijing following the contract sale signed earlier this year in February.

The Piaggio Aero P.180 Avanti II has received its type certificate in October 2011, from the China Civil Aviation Authority (CAAC). The CAAC type-certificate confirms that the design of the aircraft complies with Chinese regulations and that the Avanti II can be legally registered and operated throughout the People's Republic of China including Hong Kong. Recognition that the Piaggio Aero P.180 Avanti II design meets all of the CAAC airworthiness standards enables Chinese owners to register their Piaggio Aero aircraft under a Chinese registration. The use of Chinese grade fuel was also approved.

With a unique, contemporary, bold design, the Piaggio Aero P 180 Avanti II is the fastest and most advanced twin-engine turboprop in the world. The aircraft, which can carry up to nine passengers, is capable of flying at a maximum cruise speed of 402 kts, 745 km / h. It has a range of more than 2,700 kilometers and can fly up to a flight ceiling of 41,000 feet so the P.180 is ideally designed and matched for all Chinese medium range destinations. The full stand up cabin is, without question, the most spacious, comfortable and quiet in its class.

The Piaggio P180 Avanti II has twin-turboprop Pratt & Whitney Canada engines, that are well known and supported in China, and which provide superior performance and fuel economy delivering low operating costs and give up to 33% savings when compared to similar aircraft. The lower operating costs mean 40% less carbon emissions, making the aircraft environmentally friendly with a true green focus. The aircraft due to its incredible aerodynamic design and overall capability is able to operate from shorter runways that many aircraft, both commercial and private are unable to fly in to.

As well as its contemporary design the aircraft is able to offer many sophisticated and personalized on board options such as access to broadband internet, map systems, lighting differentiators as well as a broad portfolio of customized options at customers request.
Besides its own impressive capabilities, the Piaggio P180 Avanti II is also the only aircraft to proudly display the legendary "prancing horse" livery of the Scuderia Ferrari, the Ferrari Racing Team, as it is their chosen business aircraft due to its performance, state of the art technology and unrivalled style.

Piaggio Aero enters China with the very significant backing and support of its shareholders, who include two, worldwide, business powerhouses, TATA from India, through Tata Limited UK, and Mubadala Development, the development and Investment Company driving the economic diversification of Abu Dhabi.

“The P.180 Avanti II has achieved worldwide success with outstanding performance, comfort and economics. We are fully confident that our aircraft represents an ideal tool for China’s private aviation market expansion.” said Piaggio Aero CEO Alberto Galassi “Chinese business aviation customers and operators now have a new affordable choice, as the Avanti II is a great time saver in the air that opens up options to choose airports that may be closer to a Customer’s destination thereby reducing overall travel time. Its impressive performances and unrivalled comfort are tailored to meet the needs of the business elite and jetsetters who will love the P.180’s unique Italian style and elegance. It’s not by chance that Piaggio Aero aircraft has also been chosen by the Scuderia Ferrari, the Ferrari racing team, and it’s the only aircraft in the world displaying their legendary Prancing horse symbol”.
He further added “Piaggio Aero commits itself to provide the most excellent products for the global multipurpose aircraft market looking for the best partners worldwide to distribute and sell the aircraft. I am convinced that our partnership with CAEA Aviation will be a business booster for Piaggio Aero in China; we are proud to now be part of this growing economy”.

Chairman Wang Long, President of CAEA Aviation declared “Piaggio Aero aircraft are the most luxurious and best performing airplanes in their class, due to their performance, cabin comfort level and cost performance when compared with competitive aircraft at the same market level.
As a professional international enterprises, CAEA Aviation and Piaggio Aero will yield numerous aviation achievements in the near future. Additionally we hope that both parties can work hand in hand, to make contributions for the economic development of China.
CAEA Aviation, with its expertise, assists elite travelers through its full range of consultancy services on technical and financial aspects in purchasing their desired aircraft, as well as managing the operation and maintenance of the aircraft for its owners.”