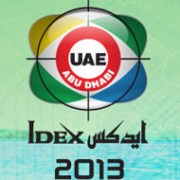 Piaggio Aero is pleased to announce that it will attend IDEX 2013 on 17-23 February 2013 at Abu Dhabi National Exhibition Centre (ADNEC) in Abu Dhabi, UAE.

The eleventh edition of IDEX will be held under the patronage of His Highness Sheikh Khalifa Bin Zayed Al Nahyan, president of the UAE and supreme commander of the UAE Armed Forces.

IDEX 2013 and NAVDEX 2013 (Naval Defence Exhibition, a dedicated exhibition for naval defense, coastal and maritime security that will run alongside IDEX) are organized by ADNEC in association with the UAE Armed Forces GHQ.

IDEX 2013 and NAVDEX 2013 are expected to showcase the latest equipment, services and technology for land, sea and ground-to-air systems, in front of more than 50,000 visitors and 300 official military and government delegation.


Piaggio Aero looks forward to welcoming you at booth #06-B24.