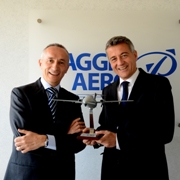 Piaggio Aero S.p.A, the Company active in the design, construction and maintenance of both aircraft and aero engines, today announced that Mr. Carlo Logli has been appointed Chief Executive Officer.

Mr. Logli, who is currently the Chief Restructuring Officer of Piaggio Aero, is the former CEO of SuperJet International, a Joint venture between Alenia Aermacchi, a Finmeccanica Company, and Sukhoi. Prior to that, Mr. Logli was the Head of Special Aircraft Versions and UAVs at Alenia Aermacchi.


Mr. Alberto Galassi, who has been CEO of the business since 2009, will become Chairman replacing Mr. Piero Ferrari, who remains a shareholder. Under Mr. Galassi?s guidance, Piaggio Aero S.p.A has diversified its product range, entering the defense and security sector developing both the Multirole Patrol Aircraft and the P.1HH HammerHead - Unmanned Aerial System.

Commenting on the announcement, Alberto Galassi, incoming Chairman of Piaggio Aero S.p.A, said: ?As Chief Restructuring Officer, Carlo Logli has been responsible for the implementation of the rescue and relaunch plan developed by management in response to challenging conditions in the Business Aviation market. He is therefore the ideal candidate to take this business forward with a clear strategic direction?.


?I would also like to thank Piero Ferrari for his contribution to the business as Chairman.
The company was founded in 1998 through the efforts of a consortium led by Mr. Ferrari, and I am delighted that he remains a part of the Piaggio Aero story as a shareholder?


In December 2013, Piaggio Aero S.p.A announced a new industrial strategy focused around product diversification, core industrial activities including the development of the P.180 Avanti aircraft and the maintenance of its prominent role in the Aero Engines sector.

As part of the new strategy, Piaggio Aero S.p.A will concentrate production activities into a new state of the art facility at Villanova d?Albenga (Savona, Italy). The Company will invest heavily in machinery, tool and processes renewal, further increasing its production capacity, particularly in the aero engines sector.


Carlo Logli, new Chief Executive Officer of Piaggio Aero S.p.A, said: ?The wide reaching restructuring plan announced earlier this year best positions the business for future growth. This program was made possible through the support of our shareholders.?


Following the completion of the transaction - which has now received formal Italian Government approval according to the ?Golden Power? law - Mubadala holds 98.05% of the share capital of Piaggio Aero Industries S.p.A. Mr. Piero Ferrari holds the remaining 1.95%.

Mubadala has been a shareholder in Piaggio Aero since 2006.

In 2013, Mubadala participated in a share capital increase which increased the equity of Piaggio Aero Industries S.p.A to support the restructuring and diversification plan focused on the development of existing core activities and new programs in line with industry requirements.