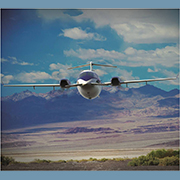 The extended range capabilities enhance maximum range of the Piaggio Aero twin turboprop, thanks to the installation of a permanent additional fuel tank , which replaces only half of a closet in the toilet and with no changes to the airframe .

The fuel capacity of the Piaggio Aero’s patented three lifting surfaces (3LS) aircraft increases from 2,826 lb to 3,226 lb - This allows the fastest business turboprop in the world to extend its maximum range by 17 % from 1470 nm to 1720 + nm - 3185 Km (IFR – FAA reserves, 4 Passengers), enabling a comfortable nonstop flight from Milan to Reykjavik and Samara, Abu Dhabi to Istanbul and Chennai, Beijing to Hainan and Hanoi, Miami to Phoenix and Quito, Los Angeles to Cancun and Detroit.

The certified additional fuel tank is available as an option on both the P.180 Avanti II model as well as for the newly designed Avanti EVO, the new version of the Piaggio Aero aircraft presented last month at the European Business Aviation Convention & Exhibition (EBACE) .

For an outstanding passengers experience also internal noise has been reduced by 20 % - 1 dB(A) and the whisper quite Avanti EVO signature cabin features also: newly designed VIP seats developed by Iacobucci HF, and finished by luxury outfitters Poltrona Frau and new cabin air conditioning and lighting systems that give passengers even greater control of the cabin environment.

“ The certification of the extended range capabilities of the Avanti aircraft reward Piaggio Aero ’ s efforts in its continuous product development activities, aimed to make our aircraft always tailored on our customers ’ needs, ”  said Carlo Logli, CEO of Piaggio Aero . “  Today, we have reached a milestone in the Avanti EVO certification process which will be completed over the next months. The Avanti is a great fit for the worldwide business aviation market; the new outstanding Avanti s non-stop range gives our aircraft impressive flexibility and will allow our operators to fly further than ever before, with an unbeatable level of comfort and speed, ” continued Logli.

The first two P.180 Avanti II with the additional fuel tank will be delivered in Beijing within the next weeks to Sparkle Roll General Aviation Ltd (a subsidiary of Sparkle Roll Holdings Limited) the first customer to operate the newly certified " Extended Range" Avanti.