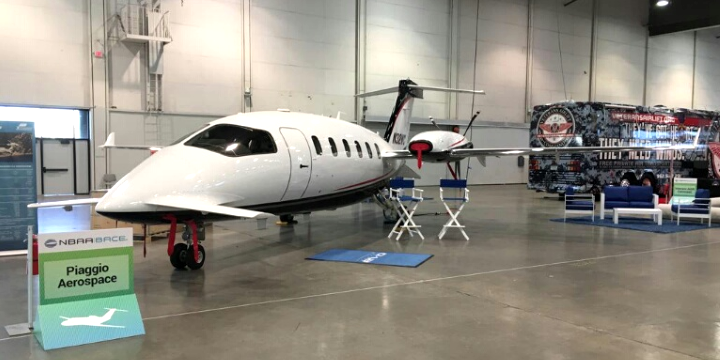 With a total order intake worth $930M (€838M), the Extraordinary Commissioner of Piaggio Aerospace, Vincenzo Nicastro has announced today at the NBAA-BACE in Las Vegas that he is now ready to launch a public tender for the sale of the Company. A formal clearance from the Italian Government to publish the tender notice is due to arrive shortly.

In the last 9 months, the Italian aircraft manufacturer, which went under Extraordinary Receivership in December last year, has signed fixed orders for a total value close to $300M (€270M), mainly in the Engine and Customer Support business units. New contracts – for a total of $630M (€568M) - will arrive by the end of year 2019.

“Piaggio has never had an order intake of such an amount during its recent history”, said Nicastro during a meeting with journalists at the Las Vegas Convention Center. “With the signing of more contracts in the upcoming weeks, we shall be closer to bringing back the company to full operation. I can now state that we have reached our goal of making Piaggio Aerospace strong enough to seek a new owner: both the aerospace industry and our existing clients can be reassured that Piaggio Aerospace will be in the market for the long haul”.

Nicastro has also announced the signing of an agreement with Sheikh Khalifa Al Saif, Chairman of Al Saif Aviation, for the purchase of at least 10 Avanti EVO, the first of which is scheduled to be delivered in the second half of 2020. According to the partnership, Al Saif Aviation will also act as an agent and distributor in Middle East, North Africa and some key territories in Europe, with the goal of promoting and marketing the Avanti EVO in the EMEA region. Al Saif Aviation, which bought its first Avanti EVO in 2016, is part of Al Saif Trading Est., a group based in Saudi Arabia. The company also operates offices in Dubai and London and is specialized in aircraft trading and consultancy.

“I confirm my commitment to the Avanti EVO, since it represents the best executive aircraft in the market, with its jet performance at turboprop costs and the widest cabin in its category. I have always appreciated, as a business traveler, the Avanti EVO, with its modern aerodynamic shape and its unique three lifting surfaces concept”, Khalifa Al Saif commented. “Now that we see that Piaggio Aerospace is back on track, we are happy to strengthen our partnership and to commit ourselves in a long term investment. We are extremely confident on a very successful future”.

“Al Saif has been Piaggio Aerospace’s valuable customer and partner for a long time, and we are extremely grateful to him for the renewed trust in the company”, Andrea Di Fede, Piaggio Aerospace Head of Sales said. “We are sure that with such an agreement, Piaggio Aerospace will be able to give a new boost to the sales of the Avanti EVO”.

With the objective of strengthening the commercial network, two more agents have been appointed. After the delivery of an Avanti EVO in Uganda last May, the Italian manufacturer has just signed an agreement with Acass Canada Ltd - a group of companies active in business aviation services headquartered in Montreal (Canada) – that will now act as non-exclusive agent for Piaggio Aerospace in South Africa, Nigeria, Kenya and Indonesia. A similar agreement has been signed with Infraestucturas Aeroportuarias SL, a company based in Madrid, active in aerospace and defense consultancy, which will represent Piaggio Aerospace in Spain, Morocco and Poland.

Meanwhile, the previously secured contracts with the Italian Government entities are close to being signed. As recently confirmed by Italian Government representatives, by the end of the year new orders will be finalized with the Italian Armed Forces for the acquisition of 9 new Avanti EVO, the retrofitting of 19 Avanti and Avanti II and the relevant Integrated Logistic Support, for a total value of $290M (€262M). In the meantime, the Engine Business Unit is closing new contracts worth approximately $139M (€125M). Finally, in the upcoming weeks the Italian Parliament will ratify an already allocated $178M (€160M) investment for the Unmanned Aerial System P.1HH: part of the investment will be needed to finalize the development process and part will be for the sale to the Italian Air Force of one system (two aircraft and one control ground station).