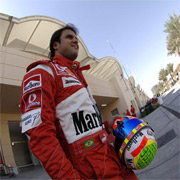 “I am pleased to have Piaggio Aero at 'my side’. Like Ferrari, it is synonymous with technological excellence and unique Italian style,” Massa declared. “While flying in the P180 Avanti, our team’s aircraft, I have come to appreciate its extraordinary features and I am happy to be its ambassador, together with Michael.”

As chairman of Piaggio Aero, Ferrari S.p.A. Vice President Piero Ferrari decided to invest in Massa. “I am enormously satisfied with this agreement, ”Ferrari said. “Felipe is a young driver of outstanding quality who will represent Piaggio Aero’s image splendidly. He had already flown in our new P180 Avanti aircraft on many occasions and like Michael Schumacher, he fell in love with it right away. I am really pleased that he accepted to be its spokesman, taking the Piaggio Aero logo onto the tracks all over the world.”

The bond between Ferrari and Piaggio Aero has now become even stronger. The Ferrari F1 Racing team has been flying in the P180 Avanti since 2000, and the team is extremely satisfied with the aircraft. Michael Schumacher regularly flies with the P180 Avanti and has displayed the Piaggio Aero logo on the visor of his racing helmet since 2001. Now Massa has joined him as a new ambassador.

“So now the team is complete,” commented Piaggio Aero Board Member Alberto Galassi, promoter of the sponsorship agreement. “After the racing team and Michael, we are giving our support to Felipe Massa, too. It is a great to be able to link our logo with both drivers of the team that has won the most in the history of Formula 1.”

The P180 Avanti II has found one more reason to display the legendary “Prancing Horse” on its livery, while the Piaggio Aero logo will make a fine show together with the drivers of the Ferrari Racing Team.

Piaggio Aero and Ferrari, once again together on the racetracks and in the skies worldwide.