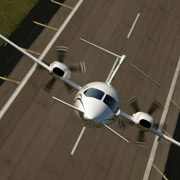 Orlando, Fla. (October 15, 2006) - Piaggio flew into the record books again today with its new P.180 Avanti II aircraft setting another new speed record, this time from Denver to Orlando. The new speed record adds to a list that began in 2000, the year the company opened its North American facility.

Piaggio America Chief Pilot Arthur St. Clair was the lead pilot for this newest speed record, with Fred Whitten joining him as co-pilot. The team flew from Denver to Orlando on Sunday, October 15. Leaving from Denver Jefferson County airport, the Avanti II reached Orlando Executive Airport in three hours and nineteen minutes. The team covered 1,369 miles for an average ground speed of 477 mph.

“This is another wonderful moment for Piaggio,” said Piaggio America President and CEO Tom Appleton. “The P.180 Avanti II is the fastest business turboprop aircraft in the world and continues to prove its prowess.”

The P.180 Avanti II is the fastest and most advanced turboprop in the world, with a range of over 1,800 miles at a speed of 398 kts (450mph) and a maximum cruising altitude of 41,000 ft. Its overall performance is similar to that of a jet but with 30 percent less fuel and operating costs. Moreover with a cabin height of 69” and width of 73”, the P.180 offers passengers a level of comfort matching that of much bigger and more costly aircraft. The P.180 is licensed to operate with a single pilot and can carry up to nine passengers.