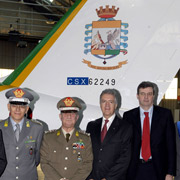 “We are proud that the Guardia di Finanza has chosen two P.180 Avanti II aircraft to join its fleet,” Ferrari said. “We are certain that these aircraft will contribute to the operability of the Border Patrol, both on a national level and on increasingly important international missions.”

The Avanti II’s flexibility and advanced technology meet the complex needs of the Italian Border Patrol in a number of ways, such as:
Fast transportation of specialized staff for timely intervention and technical coordination.
Territorial multifunctional surveillance using a Forward Looking Infra Red (FLIR) television camera system. FLIR technology is the most effective for territory surveillance activities to monitor illegal immigration and smuggling.
Fast and safe transportation of patients in specialized hospital structures, enabling the patient’s condition to be monitored during the transfer, as well as giving first aid assistance. In order to meet this requirement, the P.180 Avanti II is equipped with an “Ambulance Kit,” that, through a quick reconfiguration, allows the aircraft to become an efficient air ambulance unit and make emergency transports.

The P.180 Avanti II is the fastest and most advanced turboprop in the world, with a range of over 1,800 miles at a speed of 398 kts (450 mph) and a maximum cruising altitude of 41,000 ft. Its overall performance is similar to that of a jet but with 30 percent less fuel and operating costs. Moreover with a cabin height of 69” and width of 73”, the P.180 offers passengers a level of comfort matching that of much bigger and more costly aircraft. The P.180 is licensed to operate with a single pilot and can carry up to nine passengers.

Piaggio Aero Industries is active in design, manufacturing, maintenance, repair and overhaul of aircraft, engines and engine parts under license, and the manufacturer of aerostructure components. The company has facilities in Genoa, Finale Ligure and Naples (Italy) and subsidiaries in Nice (France) and in West Palm Beach, Fla. (U.S.A.). Technology and commitment in research and development, along with innovative design solutions, is the driver for Piaggio Aero Industries’ current and future programs. Core product for Piaggio Aero Industries is the P.180 Avanti II twin turboprop pusher business/utility aircraft.