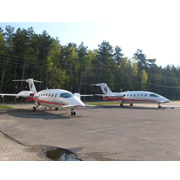 The Italian aircraft was the winner of the public tender issued by LPR in November 2006 for equipping its flight department with a new fast and efficient air-ambulance operating unit. The Avanti II has been selected after an extensive evaluation process that took into consideration the performance of the first P.180 Avanti Air Ambulance which was acquired by LPR in 2004. The Avanti II has been chosen considering its outstanding operational capabilities implemented performance and cost effectiveness in the MedEvac Role.

Lotnicze Pogotowie Ratunkowe carried out a detailed study of different turboprops and light Jets and again highlighted the P.180 for its operation due to its unmatched operational flexibility, economics and performance. The unobstructed space available within the P.180 stand up cabin with its unrivalled cross-section and the very low ambient noise levels of the Piaggio Aero’s aircraft, were some of the key factors in the LPR’s final decision. The Avanti II provides outstanding accessibility for patient loading, and its large cabin offers a work-friendly environment for medical staff to gain access for up to two patients on the well-proven Lifeport stretcher systems. Facilities for incubators and other medical equipment are also provided on board. The Avanti II  features medical equipment supplied by Lifeport Inc.

P.180 Avanti II
ed executive turboprop in the world. The P180 Avanti II has an endurance of over 1,700 miles at a speed of 400 kts and a maximum cruising altitude of 41,000ft. Its overall performance is similar to that of a Jet but with 30% less operating costs. Moreover with a height of 69” and depth of 73”, the P180 offers passengers a level of comfort matching only that of bigger and more costly aircraft.
The Pratt & Whitney, Canada PT6-66B engines, rated at 1630 thermodynamic HP, are de-rated to 850 SHP. They power the Avanti II to a certified altitude of 41,000 feet and speed of 402 kts. at 30,000 feet with a maximum operating mach (Mmo) of 0.70. The P180 is licensed to operate with a single pilot and can board up to nine passengers.