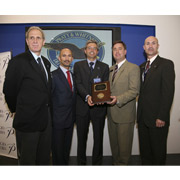 ARIS AIR SHOW, PARIS, France, June 18, 2007 - Pratt & Whitney and Piaggio Aero Industries signed three agreements to begin manufacturing no.4 bearing components for the F135 engine. Additionally, Piaggio recently delivered its first production bearing housings. The agreements have a potential value of more than US$144 million over the life of the program. Pratt & Whitney is a United Technologies Corporation company.

“Piaggio was our first Italian supplier for the F135 program and we’ve been working with them for over three years now,” said Ed O’Donnell, Pratt & Whitney F135 International Programs director. “This partnership helps Pratt & Whitney provide best value and affordability for our customers.”

“We are proud that Pratt & Whitney keeps expanding its relationship with Piaggio Aero,” said Giuliano Felten, Piaggio Aero Commercial and Strategic Procurements Director. “This demonstrates the enormous amount of confidence this major engine industry world player has in our company. We are confident Piaggio Aero is going to be more and more involved in the Pratt & Whitney F135 engine production.”

Pratt & Whitney is the lead propulsion system supplier for the F-35 program and to date, the F135 engine has logged more than 7,700 system design and development ground test hours and continues to power the F-35 Lightning II flight test program. The F135 engine is an evolution of the F119 engine for the F-22 Raptor; together the F135 and F119 will have logged more than 600,000 hours before the F-35’s introduction into operational service in 2012. Rated at more than 40,000 pounds of thrust, the F135 is the most powerful fighter engine ever built.