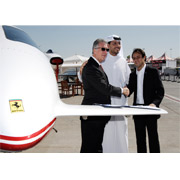 Piaggio Aero will display its P180 Avanti II executive aircraft at the 10th edition of the Dubai Air Show which runs from the 11-15th November at the Airport Expo Dubai.
The DAS is one of the world’s most important trade events in the field of global aviation among those lining up for the Dubai Air Show for the first time is the Mubadala Aerospace Division and Piaggio Aero will attend the show as part of Mubadala Development Shared Company Group.

The P.180 Avanti II in Ferrari livery will be shown on the static display, it features a fully integrated new Pro Line 21 avionics system and the new engines PWC P66A-66B making the Avanti II the most fast up-to-date and still the fastest turboprop in production.

The link between Ferrari, Mubadala and Piaggio Aero is therefore stronger than ever: The world champion racing team flies the P.180 Avanti II the only aircraft in the world to  proudly display on its livery the 'prancing horse’, Ferrari’s legendary trademark. The new F1 World Champion Kimi Raikkonen and Felipe Massa are both spokesperson for the Avanti II.

The Piaggio Aero aircraft, like Ferrari’s cars, represents the excellence and the world-wide success of the technological products made in Italy. Piaggio Aero and Ferrari are synonymous with success, efficiency, technology and unrivalled Italian design.
Piaggio Aero is proud to provide the Wings to the Winners.