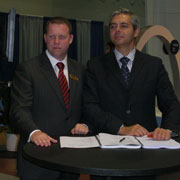 Orlando, FL, 5th October 2008, Piaggio Aero Industries has announced at NBAA 2008 that Harrods Aviation has been appointed as a Piaggio Aero 'Exclusive Dealer’ for the innovative Piaggio P.180 Avanti II business aircraft.
Harrods Aviation will promote the Avanti II within the UK, Ireland, Isle of Man and Channel Island territories.

The Avanti II achieves 'Jet’ performance and is able to reach a certified altitude of 41,000ft and a maximum speed of 402 knots (at 31,000ft) with the fuel efficiency of a Turbo Prop, burning about 40 per cent less fuel than a same size jet. While in flight the spacious cabin sets new standards in comfort, smoothness and extremely low ambient internal cabin noise levels. The cabin provides seating for seven plus passengers to travel in unprecedented first class comfort. The 'stand-up’ cabin is six feet wide and five feet nine inches high which is considerably wider and taller than most of the competing business aircraft in its weight and pricing class.

“With the appointment of Harrods Aviation as official dealer for the P-180 Avanti II in Great Britain and Ireland Piaggio Aero in going to introduce the P.180 Avanti II in two important European markets that offers us very high potential for sales”, commented Giuliano Felten Piaggio Aero Senior vice President Marketing and Sales. “We trust Harrods Aviation as one of the most competent and dynamic business aviation reality in the British market”.

A Harrods Aviation spokesperson said, "Harrods Aviation is extremely proud to be associated with Piaggio Aero Industries. In today's ecologically sensitive world the Piaggio Avanti II is set apart from its competitors with its ability to achieve a high level of performance, with unrivalled fuel efficiency and a minimal noise footprint. These attributes permit the aircraft to operate out of smaller peripheral airports with landing and take-off distances that are simply unachievable in a comparably sized jet. As a company we feel that the two worldwide recognised brands of "Harrods Aviation" and "Piaggio Aero” emulate high quality and performance and trust the synergy between the two companies will assist in promoting the P.180 Avanti II exciting and innovative aircraft".