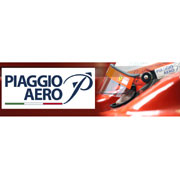 Genoa, Italy March 27 2009: Today Piaggio Aero Industries announced that their image to the world has changed as the Italian Aviation Company proudly presents a newly designed company logo that better portrays the importance of the Piaggio brand.

Piaggio Aero Industries, has at the same time, signed a sponsorship agreement with Scuderia Ferrari the F1 Constructor’s World Champions The Piaggio Aero new logo will feature on the racing helmets of both Ferrari pilots during the 2009 Formula 1 world Championship which will commence this weekend with Australian Grand Prix.

After having sponsored the Ferrari’s drivers for many years, Michael Schumacher, then Felipe Massa and Kimi Raikkonnen, Piaggio Aero is now official sponsor of the Scuderia Ferrari, the Ferrari Racing Team.

Mr. Piero Ferrari, Vice Chairman of Ferrari S.p.A. and Chairman of Piaggio Aero commented “After the success of latest seasons, we decided to make Piaggio Aero the sponsor of the Scuderia Ferrari by dressing Kimi and Felipe’s racing helmets with the new Piaggio Aero logo. Success in Formula 1, as in aviation, includes symbols and I am proud to see the companies to which I devote both my professional work and sport passion, head towards the target of winning, hand in hand. I’m proud to see that Piaggio Aero and the Scuderia Ferrari run together on the Formula One Circuits, just as I know that the whole team both flies and appreciates the Piaggio Avanti II airplane”.

Clean, contemporary and displaying clear evidence of the colors of Piaggios Italian home the new logo marks an important milestone for the renowned aviation company. “There are many exciting projects happening at Piaggio at the moment”, said Mr. Alberto Galassi, Piaggio Aero CEO. “There was no better way to indicate some of the many changes that will be coming, than to change the external image of the company starting with our company logo”

“It gives me great satisfaction to be able to combine our strong new logo with  the Scuderia Ferrari, the legendary racing team that has the most victories in the history of Formula 1.I would like to thank Mr. Luca di Montezemolo, Stefano Domenicali, Felipe Massa and Kimi Raikkonen and all the racing team that have chosen Piaggio Aero. We are proud to have these extraordinary professionals, renowned for their speed and efficiency providing representation and visibility of Piaggio Aero, the world over and, to be able to continue the strong ties and success that exist between Piaggio Aero and Ferrari” he added.

The Piaggio Avanti II aircraft is ideal for today’s environment. It offers full stand up headroom, the quietest cabin and fastest cruise speed in its category but with one difference- it uses powerful twin turboprops rather than jet engines. These high performing, yet surprisingly fuel efficient engines, ensure that the Piaggio Avanti II delivers the same or better speed performance than its jet competitors while offering about a 30% fuel saving for the same mission.

In terms of carbon emissions the Piaggio Avanti II has a smaller carbon footprint than that of all business aviation aircraft of its segment. Piaggio Aero’s efforts are focused on improving the most environmentally friendly and fuel efficient turboprop while offering the same or better performance than that of its more expensive and heavier polluting jet competitors. These are the same efforts that the Formula 1 industry is taking with their research into new engines, electronics and regenerative braking systems. All these innovations that filter back to volume production cars, and the aviation industry, particularly the business aviation segment, represent a great benefit to the environment.” commented Mr Galassi.

A contemporary, fast, fuel efficient, aircraft, outrageously spacious and with a concern for the environment, the Piaggio Avanti II is a truly relevant aircraft for any business jet user today.

“Our new logo heralds the arrival of a chapter in the company’s history where, its aircraft have never been a more perfect match for the current socio economic climate, that private aircraft users and owners like Scuderia Ferrari are operating their planes in, concluded Mr. Galassi

The connection between Ferrari and Piaggio Aero remains strong: The Scuderia Ferrari fly their Piaggio Avanti II, displaying the legendary ‘prancing horse’ logo and now will drive its world beating Formula 1 cars with the new Piaggio Aero logo on them. It is a true partnership teaming together to bring success on the racing circuits and in the skies all over the world.