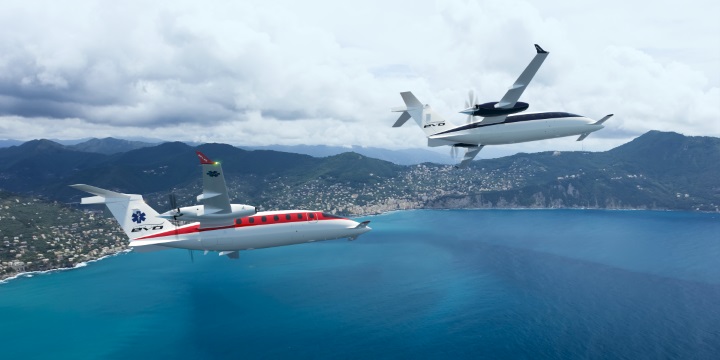 Oyonnair, a French airline company specializing in business, medical and cargo transportation, and Piaggio Aerospace, a leading Italian aircraft manufacturer active in the business and defence and security sectors, today shared the positive impact of their partnership following two years of deploying the P.180 Avanti aircraft.

Oyonnair is a European pioneer in using turboprop aircraft for medical transportation, representing 60% of the French market for turboprop medical flights including urgent cargo and medical evacuation. Since 2015, Oyonnair’s fleet has comprised of five of Piaggio Aerospace’s flagship Avanti, a model renowned for its extended range, superior climb performance and class-leading fuel economy.

Since coming into service, the fleet of four Avanti II and one Avanti I aircraft have allowed Oyonnair to increase flight numbers by 50%. In the last year alone, Oyonnair has registered 3,000 hours with a 98% availability rate, the indicator of the highest standards of aircraft reliability and aftermarket performance.

All Oyonnair Avanti II aircraft feature a flexible aircraft configuration, allowing shifting between set up for one stretcher and five passengers or two stretchers and three passengers, while the pressurized cabin is optimally sized for a medical team to take care of the patients and to reanimate them in flight.

The fleet also features specialized medical equipment, such as oxygen supply, an electrical power supply with capacity for incubators or cargo transportation, while all aircraft are less than 10 years old.

Nathalie Chaillou, Base Manager and Pilot of Oyonnair, said: “Our CEO, Daniel Vovk, made a strategic decision to choose Piaggio Aerospace, a decision that is paying dividends. Thanks to the Avanti’s unique cabin, combined with the aircraft’s excellent performance and low fuel consumption and the Piaggio Aerospace Customer Service, Oyonnair has managed, since the beginning of its activities, to increase its market share in MedEvac transportation.”

Renato Vaghi, Chief Executive Officer of Piaggio Aerospace, said: “We are delighted to announce extremely positive results coming from the partnership with a European excellence in medical transportation and to contribute to make MedEvac Operations more and more reliable. We thank Oyonnair for trusting Piaggio Aerospace to support this critical work.”