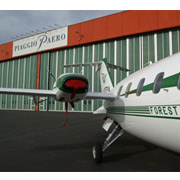 Rome, June 27th 2005 - this morning Piaggio Aero Industries took its first P180 Avanti aircraft to the CFS hangar at the military airport of Ciampino and delivered it to the Italian National Forestall Corps. Mr. Cesare Patrone, Head of the National Forestall Corps, the top management of the naval service of the Corps, Piaggio Aero CEO Mr. Jose Di Mase and Board of Directors Mr. Alberto Galassi took part in the event.

The Piaggio P180 Avanti, which has just joined the National Forestall Corps’ fleet, is a bi-turbin pressurized aircraft with 3 carrying surfaces, configured to “high density”, able to carry up to 7 passengers and 2 pilots. Piaggio Aero’s jewel has a stand-by capacity of over 1.700 miles at a speed of 395kts (450 mph) and is able to reach an altitude of 41.000 ft: these performances can be compared to those of a turbojet aircraft, maintaining however a 30% lower operative cost than a Jet. The P180 is also equipped with a wide cabin which together with its flexibility of use and the multiplicity of the equipment that can be installed satisfies the different needs of the Forestall Corps:

-  Territorial multifunctional surveillance using an FLIR/TV Camera System. This innovative equipment will make the National Forestall Corps’ supervision more effective for designating land for proper use, fighting forest fires, monitoring productive activities, keeping a count on flora and fauna and controlling the morphologic evolution of the land and its underground waters.
-  Fast transportation of specialized staff on the entire national territory (in particular between the different helicopter bases of the Corps): primary necessity for the technical coordination during territorial emergencies, special events and transportation of both specialized teams and equipment to the required places.
-  Fast sanitary transportation of patients in specialized hospital structures, with the possibility of checking on the patient’s conditions during the transfer as well as giving efficient first aid assistance.

In order to meet the National Forestall Corps’ requirements and to give a contribution to their meritorious activities, Piaggio Aero donated the “Ambulance Kit” for the P180 Avanti. An equipment that, through a fast reconfiguration, allows the aircraft to make emergency sanitary transports, thus becoming an efficient air ambulance unit.