Geneva May 21, 2006
The Piaggio Aero P.180 Avanti II now flies faster than ever: EASA certification obtained for the upgraded Pratt&Whitney Canada PT6-66B engines and for the new maximum cruise speed of 402 kts 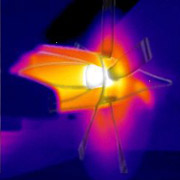 “We are exited about reaching this extraordinary speed record and are glad to have obtained the certification for P.180 Avanti II’s new engines. “ said Piero Ferrari, Chairman of Piaggio Aero Industries. “and we are proud to have been able to improve an already outstanding aircraft with a more valuable, more competitive and more mature product. The Avanti II - with the upgraded engines and the certification for the new extraordinary maximum speed of 402 kts - represents the next generation of Piaggio Aero aircraft and we are delighted to present it to the business aircraft market. The engineers and technicians at Piaggio Aero succeeded in enhancing an already incredible aircraft.”

Thanks to its new performance the Avanti II really deserves to be known as the “Ferrari of the Sky”: As the Maranello racing team and the Ferrari’s Drivers - spokespersons for the P.180 Avanti II - the 180 Avanti II has not any competitors in terms of speed, performance and style in the turboprop executive aircraft market.

The new engine configuration of the Avanti II gained official approval after an extensive development and test program carried out under the supervision of the Italian National Civil Aviation Agency, ENAC, on behalf of EASA.
The introduction of upgraded Pratt&Whitney Canada PT6-66B engines, providing higher performance, faster cruise speeds and more efficient operation.

The updated engines, PWC PT6A-66B, deliver approximately 8 to 13 percent more power in cruise and climb while remaining in the basic thrust on ground. The engines also increase cruise speed and mission performances, and get up to over 402 KTAS at 31000ft with a Mmo 0.70 cruise.
This latest upgrade, was accompanied by several other modifications that have improved the Avanti II overall:

-New Integrated Avionics, to reduce pilot workload and increase situational awareness with a full integrated Proline 21, which is currently the most sophisticated avionics for this class of aircraft.
-Increased MTOW 12100lbs (5500kg) to increment payload by 550lbs (250kg), without any physical change to the structure and to the landing Gear.
- Increased Max Zero Fuel weight by 300lbs to improve payload capability with the same wing structure, thanks to a full scale static test in the Piaggio Aero structural lab.
- Upgraded interiors give passengers an even more stylish and comfortable environment. The P.180 Avanti II offers the largest and most comfortable cabin environment of any aircraft in its class.

Pratt&Whitney Canada has supported the development of the –66B evolution in the PT6 family. The new compressor and different materials in the hot section deliver more power, as requested by Piaggio Aero to enhance performance of the heavier aircraft. PT6A–66 and –66B on Avanti II fly at the highest flight level for the PT6 family. Special care has been taken by P&WC to assure optimum handling performance of the engine at high altitude. The P180 have now reached the original, very ambitious design target of 400KTAS, Mmo 0.7 cruise, a unique record for a civil turboprop aircraft. The Avanti II already holds 17 world speed records.

The first Avanti II with the upgraded engines PWC PT6A-66Bis currently being delivered at Piaggio Aero’s Genoa facility to Transpor’AIR, a charter operator based in Avignon (France). Transport’AIR received its first Avanti II in march 2007 and has three more aircraft on order, sold by Boutsen Aviation the Piaggio Aero exclusive representative in France, for delivery in 2008.

The new engines service bulletin will also be available for the P.180 Avanti’s operator owning the previous –66A Version.

One hundred and twenty-five of Piaggio Aero’s flagship product have already been delivered to an eager market with more than 85 aircraft in backlog for the Avanti II, upgraded with the new PT6A-66-Bnew engines, having a total value equivalent to over 550 million US Dollars.

“The P.180 is the fastest and most advanced business turboprop aircraft in the world and continues to prove its prowess.” says Mr. Josè Di Mase, Piaggio Aero CEO,” The upgraded Avanti II is truly the new frontier in fast executive flying.”

The P180 Avanti II, equipped with the new Rockwell Collins Pro-Line 21 avionics and currently in production, enables great performance in terms of cruising speed and a high loading capacity which, together with its brilliant performance and futuristic design, makes it the fastest and most advanced executive turboprop in the world. The P180 Avanti II has an endurance of over 1,700 miles at a speed of 400 kts and a maximum cruising altitude of 41,000ft. Its overall performance is similar to that of a Jet but with 30% less operating costs. Moreover with a height of 69” and depth of 73”, the P180 offers passengers a level of comfort matching only that of bigger and more costly aircraft.