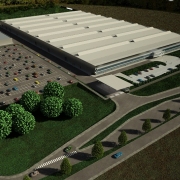 Today marked a major achievement for Piaggio Aero’s industrial growths programs as the Italian manufacturer celebrated the groundbreaking of its new Villanova d’Albenga manufacturing plant which will be operational by 2013.

Attended by Piaggio Aero’s Chairman Piero Ferrari, its CEO Alberto Galassi , other top Company management and the Local Authorities , the groundbreaking lays the path for the new Piaggio Aero state of the art facility which will be focused on the manufacturing of parts and subassemblies for the P.180 Avanti II aircraft and aero engines manufacturing, repair and overall cycles. All of these activities are currently located in Piaggio Aero Finale Ligure’s plant which will be transferred into the new high technological facility in Villanova d’Albenga while the P.180 Avanti II final assembly line will continue at the company’s other production plant in Genova Sestri Ponente.
Piaggio Aero is the only company in the world active in the design, manufacturing and maintenance of both aircraft and aero engines.

Piaggio Aero Industries' Chairman, Piero Ferrari stated: “It’s a red-letter day for Piaggio Aero, with the new production plant ground breaking we have reached a memorable milestone in the development of our company which has been made possible thanks to the support of Piaggio Aero’s employees, shareholders and national and local institutions.” He declared “I’m proud that Piaggio Aero is able to continue its industrial expansion in Italy , and with the great support of our primary international shareholders Mubadala and Tata, will continue down the path of sustained future growth ” Mr. Ferrari added.

The new production plant of 49.300 square meters will be located in an area of total 127.000 square meters in a strategic position behind Villanova d’Albenga airport with direct access to a 1500 meters runway. The investment required for this project is about 100 million Euros.

Villanova d’Albenga, Piaggio Aero’s new factory, has been conceived to increase production line efficiency and speed up lean manufacturing cycles. The new plant will also offer a high quality work environment and a museum telling the extensive history of the Company since its foundation in 1884 to date.

As part of Piaggio Aero’s mandate to contribute to a more sustainable future for the aviation industry, the company, which manufactures the most fuel-efficient aircraft with the lowest emissions in business aviation, now extends its ecological attention to facilities and manufacturing processes . The new Piaggio Aero production plant will obtain the ISO 14004 certification.

FILANMARE S.p.A., owned by GEFIM S.p.A. Ersel and Ferrero Group, headed by its CEO Pierpaolo Ponchia family, has been appointed to build the new Piaggio Aero production plant . FINALMARE will also manage the redevelopment of the former industrial area in Finale Ligure that Piaggio Aero will leave in 2013 after more than 100 years and, 55 models of aircraft designed and manufactured together with high technological aero engine productions. Its innovative products positioned Piaggio Aero as one of the most authoritative ambassadors of Italian high technology in the world.