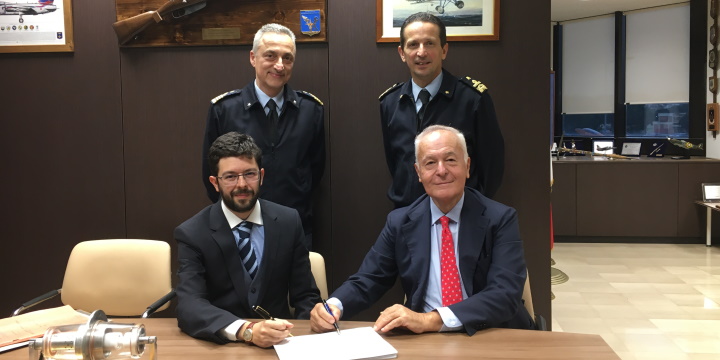 At the desk, signing the contract: on the left Antonio Arlotta, Director of the 9th Division of Italian General Directorate of Air Armaments (ARMAEREO) and on the right the Extraordinary Commissioner of Piaggio Aerospace Vincenzo Nicastro

Piaggio Aerospace, the Italian aircraft manufacturer based in Villanova d'Albenga (Savona), announced today that its Engines business unit has signed a contract with the Italian Ministry of Defence worth 50 million euros.

According to the agreement, Piaggio Aerospace will provide technical-logistic support for the engine 55-L-714 - designed by the US Company Honeywell - powering the CH-47F helicopters, better known as Chinook, currently operated by the Italian Army.

Under the nine-year agreement, aimed at ensuring the fleet maintenance and efficiency, Piaggio Aerospace will supply the armed force with spare parts and spare engines. It will also guarantee maintenance, repair and overhaul activities, together with technical-logistic support at the various Italian Army’s flight bases.

"The contract signed today allows us to strengthen our Engine business unit, while we are close to signing more contracts with the Ministry of Defence on the P.180," Vincenzo Nicastro, Piaggio Aerospace Extraordinary Commissioner commented.