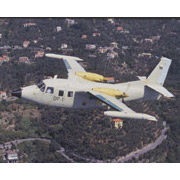 The delivery was part of a ceremony at the Paris Air Show attended by Guardia di Finanza Deputy Chief of Staff, Gen. Paolo Poletti, and Lt. Colonel Maurizio Muscarà, pilot and chief of the Air Office of the General Headquarters of the Guardia di Finanza. Attending for “We are honored that the Guardia di Finanza has chosen to be the first client for the launching of the P.166 DP1,” said Ferrari. “It is a more modern and effective aircraft for control and patrolling of the territory and the fundamental activities in the fight against illegal immigration, smuggling and environmental pollution; tasks currently undertaken successfully by the Corps.”

With the upgrade the entire fleet of 32 P166s - flown by the Guardia di Finanza, the Italian Coast Guard and the Italian Air Force - can now be equipped with the latest technology, including the SUR-Surveillance system - an essential tool for maritime patrolling. Pratt & Whitney PT6A-121 engines power the DP1, which has a range up to 1,945 kilometers with a crew of two and four passengers. The DP1’s conversion also guarantees the aircraft an operational life of 15,000 hours.

The DP1 requires a higher initial investment than the DL3, but the DP1’s upgrades provide considerable savings on operational and maintenance costs, offsetting the upfront cost. Piaggio Aero also offers a “power by the hour” program for DP1 scheduled and unscheduled maintenance.