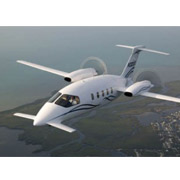 The new aircraft gained official approval after an extensive development and test program program carried out under the supervision of the Italian National Civil Aviation Agency, ENAC, on behalf of EASA. US certification from the US Federal Aviation Administration (FAA) is expected within the next few weeks.

The P180 Avanti II is equipped with the fully digital, automatic flight control and displays of the latest generation Rockwell Collins “Pro Line 21” avionics system, the most advanced on the market today. This totally new and integrated digital avionics package provides the pilot with better situational awareness, resulting in even higher levels of safety, efficiency, flexibility and reliability.

“We are proud to have obtained the P180 Avanti II’s certification in such an extremely short time,“ declared Mr. Piero Ferrari, President of Piaggio Aero Industries. “This aircraft, with its new generation Pro Line 21 avionics, represents the next generation of Piaggio aircraft and we are delighted to present it to the business aircraft market. The engineers and technicians at Piaggio Aero have succeeded in enhancing an already incredible aircraft.”

The new Pro Line 21 avionics system enhances the traditional P180 characteristics, making Avanti II the most up-to-date and still fastest turboprop in production, more efficient and more flexible than most business jets. As the price of oil continues to escalate, so the fuel efficiency of Avanti II becomes more and more attractive to business aircraft owners in the years ahead. One hundred of Piaggio Aero’s flagship product, the Avanti, have already been delivered to an eager market with more than 70 aircraft in backlog for the Avanti II, having a total value equivalent to 450 million US Dollars.

Already renowned for having the largest and most comfortable cabin environment of any aircraft in it’s class, Avanti II will soon benefit from upgraded interiors giving passengers an even more stylish and comfortable environment.

Piaggio Aero plans to exhibit the first production model of the P180 Avanti II at the National Business Aviation Association (NBAA) convention, the prestigious international business air show held in Orlando, Florida, U.S.A., from the 9th to the 11th of November; Piaggio Aero Industries will feature on stand 4597.

From the 20th to the 24th November the aircraft will display in Dubai, the premier air show in the Middle East. This expanding market offers terrific potential and is one in which the P180 Avanti II has already drawn great interest, both for the civil and military version.