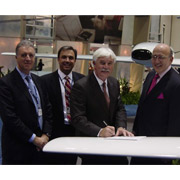 Orlando, Fla. (November 10, 2005) - Piaggio America and Avantair signed a milestone agreement contract today that calls for 36 Piaggio Avanti II aircraft to be delivered to Avantair in 2008 and continue through 2010. The deal is worth more than $230 million.

“This agreement is the single largest sale in the history of Piaggio Aero,” said Tom Appleton, Piaggio America president and CEO. ”The demand for Avanti II aircraft continues to increase and this agreement will assure Avantair of a steady stream of aircraft for its fractional fleet through 2010.”

“Avantair has experienced remarkable growth during the past two years,” said Steve Santo, president and CEO of Avantair. “Our commitment to the highest quality of service, and the characteristics of this wonderful aircraft, has really created a strong demand in the fractional marketplace. We are proud to be the only fractional provider in the world offering the Avanti II.”
The first Piaggio P.180 Avanti production model flew in May 1990, and was certified in October 1990. The first Avanti II was certified in October, 2005, and is scheduled to be delivered in early 2006.

The Avanti II features enhanced avionics, engines, speed, payload and cabin comfort. The flight deck includes Rockwell Collins’ Pro Line 21 avionics suite featuring three 10’’ x 8” liquid crystal adaptive flight displays, the FMS 3000 flight management system and the AHS 3000 attitude heading reference system.
The upgraded Pratt & Whitney engine PT6A-66B is expected to add 12 knots or more to the high speed cruise. The Avanti II has a maximum cruise speed of 398 knots (460 mph) and a maximum operating mach (Mmo) of .70. It is capable of flying 1,800 nautical miles and cruises at altitudes up to 41,000 ft. The Avanti II’s reliability and performance make it the most advanced turboprop in corporate aviation and the fastest turboprop in the world.

The Avanti II also features an increase in maximum zero fuel weight, from 9,500 lbs. to 9,800 lbs., maximum takeoff weight from 11,550 lbs. to 12,050 lbs., and reduced empty weight. This increases the useful load by one to two passengers at longer ranges. Some Avanti II enhancements will eventually be made available for retrofit on the existing fleet.