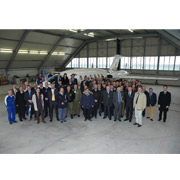 The Italian Air Force, the top-ranked operator in terms of number of P180 Avanti aircraft in its fleet (15), and in particular of General of B.A. Luca Valeriani – Commander of the 9th Air Brigade “Leone” – and of Pilot Colonel Stefano Fort – Commander of the 14th Formation – hosted the conference. Attending were Piaggio Aero top management, with the CEO Josè Di Mase, and Piaggio America CEO Tom Appleton.
Other guests were managers and delegations of the air services of the Italian Army (which uses 3 P180 Avantis), the Italian Navy (which uses 3 P180 Avanti “Maritimes”), the Civil Defense (which uses 2 P180 Avantis), the Corps of Foresters and Fire Department (which use 1 P180 Avanti), and the Carabinieri, State Police and Financial Police, to whom Piaggio is going to deliver the new P180 Avanti II aircraft.

All the operators presented their data pertaining to the acquisition, configuration and utilization of their fleets, as well as their training procedures and maintenance activities, interacting to offer proposals aimed at improving the aircraft and support services.

Piaggio Aero illustrated to its customers flattering sales, operations and reliability data of the P180 Avanti and its plans to increase production and improve Customer Support.

Also attending the conference were representatives of Pratt and Whitney Canada, which supplies the engines for Piaggio Aero aircraft; Rockwell Collins, the manufacturer of the new Pro Line 21 avionics; and Honeywell and Microtecnica, suppliers of some on-board and Flight Safety International systems, and Piaggio Aero’s partners for training support on flight simulators.

During the conference the new aircraft P180 Avanti II was presented, landing in Piaggio Village, the new complex providing product support to the aircraft operated by the institutions. Piaggio Aero inaugurated it in February on the Pratica di Mare base.

The new P180 Avanti II is equipped with the entirely digital, latest generation avionics system, “Pro Line 21”, manufactured by American company Rockwell Collins. It is one of the most advanced pieces of equipment found today on the market. The new avionics guarantees maximum levels of flexibility, safety and operations reliability. Its aim is to offer top performance, lower consumption and the absolute most of what technology has to offer.

A new motorization will also be introduced. The P180 Avanti II aircraft will be propelled by Pratt & Whitney PT6-66B engines, which will guarantee even greater performance in terms of speed and cruising altitude, associated with further reduction of fuel consumption.

Avanti II certification has also made realization of some important retrofits for the Avanti version possible, among these the chance to certify a new increased maximum take-off weight (MTOW), from 11,550 lbs. to 12,100 lbs., which will offer the aircraft presently in a fleet greater ductility in operational uses owing to the increased useful load and greater operating range.

The first P180 Avanti Users’ Conference was an important occasion for a reciprocal exchange of information and evaluations between the builder and the operators, above all thanks to the active participation of the many who took part, who showed enormous satisfaction in their use of the aircraft and a large amount of interest in the new “Avanti II”.