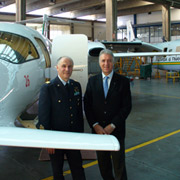 Genoa, February 13, 2007- The Chief of the Air Staff Vincenzo Camporini, Chief of Staff of the Italian Air Force, today paid a visit to Piaggio Aero Industries.

It is the first time that the new chief of staff, who took over from the Chief of the Air Staff Leonardo Tricarico last September, has visited a privately held company in the aeronautical sector.

General Camporini, who travelled to Genoa on board a P.180 Avanti of the 14th Wing accompanied by Lt. Col. Luca Baione and Col. Amedeo Magnani, was welcomed to the plant by Chairman Piero Ferrari and Chief Executive Josè Di Mase, together with Managing Director Alberto Galassi and General Manager Ugo Anatra.

The chief of staff expressed his satisfaction at having the opportunity for a precise update on the activities and programs of Piaggio Aero, which “today represents a point of excellence in the high technology industry of which the country can be justly proud”.

The Italian Air Force is the most important operator of the P.180 Avanti in Europe.
The Arma Azzurra operates 15 of the aircraft, which are used in personnel transport, logistics and emergency medical relief missions. Thanks to their efficiency and operative adaptability, the Piaggio Aero aircraft are used in Italy and Europe and increasingly on international missions conducted by the Italian Air Force.

Also on behalf of the Italian Air Force, Piaggio Aero is heavily involved in the maintenance, overhaul and repair of the Viper MK632 engines which power the Aermacchi MB.339 aircraft used by the Pattuglia Acrobatica Nazionale (Italian Air Force aerobatic team), also known as the Frecce Tricolori (Three-coloured Arrows).

During his visit to the Genoa plant, the chief of staff was shown the development plans of Piaggio Aero and in particular the next electronic radio/radar calibration version of the P.180 Avanti II, as well as the mid-life updating program for the P.166 model, which will upgrade the aircraft used by the Italian Air Force to the DP1 version.

“We are honored by the visit of General Camporini and delighted to be able to share the success of our aircraft with the Italian Air Force, one of the primary users and promoters of our P.180 Avanti in the world,” underlined Piero Ferrari, Chairman of Piaggio Aero. “The presence of the chief of staff at our company serves to demonstrate the closeness and support given by the Italian Air Force to the Italian aerospace industry, both of which are ambassadors of professionalism and Italian excellence throughout the world”.