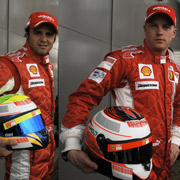 Melbourne, Australia (March 15, 2007) - Piaggio Aero Industries has signed a new sponsorship agreement with Felipe Massa and Kimi Raikkonen, both drivers of the Scuderia Ferrari F1 team. As part of the agreement the Piaggio Aero logo will be featured on the drivers’ racing uniforms throughout the 2007 season. The P.180 Avanti II is the carrier of the Scuderia Ferrari team and is the only aircraft in the world to proudly display on its livery the 'prancing horse,’ Ferrari’s legendary trademark.

“I am pleased that Piaggio Aero is still by my side – a company that, like Ferrari, is synonymous with technological excellence and unique Italian style,” Felipe Massa said.

“Flying aboard the P.180 Avanti II, which is the carrier of our team, I have come to appreciate its extraordinary features and am very happy to have become its spokesman alongside Felipe,” Raikkonen said. “Speed has always been my passion and the new P.180 Avanti II is without doubt the Ferrari of the sky.”

“Having partnered with Felipe last season, I am also enormously satisfied to welcome Kimi to our family,” said Piero Ferrari, Vice Chairman of Ferrari S.p.A. “Felipe and Kimi are young drivers with proven experience and have the qualities that we want representing the image of Piaggio Aero. They often fly in our new executive P.180 Avanti II and are fully satisfied with its performance. I am thrilled that they have both offered to serve as spokesmen for the aircraft and our brand, and that the Piaggio Aero logo will be seen at race circuits around the world.”