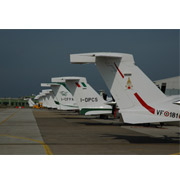 The conference was hosted by General Luca Valeriani, Commander of the Pratica Di Mare Military Airport, and Colonel Andrea John Venanzi, Commander of the 14th Formation, as well as the Italian Air Force, which is the top-ranked operator in terms of number of P.180 Avanti aircraft with a fleet of 15. Piaggio Aero’s General Manager Ugo Anatra and Commercial and Strategic Procurements Director Giuliano Felten also attended.

Also attending the conference were representatives of Pratt and Whitney, Canada, which supplies the engines for Piaggio Aero’s aircrafts; Rockwell Collins, the manufacturer of the new Pro Line 21 avionics; and Honeywell and Microtecnica, who supply some of the onboard systems.

In addition to these attendees, there are also many private, charter and aero taxi companies who use the P.180 Avanti II. Thirty-five of Piaggio Aero’s planes operate in Italy, and another 125 are operated in Europe, North and South America.

During the conference, all the operators presented data pertaining to the acquisition, configuration and utilization of their fleets, as well as their training procedures and maintenance activities. The meeting encouraged interaction among participants to offer suggestions to improve the aircraft and support services.

In turn, Piaggio Aero provided updated sales, operations and reliability data about the P.180 Avanti II and the company’s plans to increase its production and continually improve customer support.

Tomorrow will mark Piaggio Aero’s 35th anniversary of the 71st flight group of the 14th Storm, and the group will celebrate the P.180 Avanti’s 30,000 hours of flight for the Air Force. This milestone provides more proof of the P.180 Avanti’s efficiency, durability and dependability to the Air Force and other government institutions.