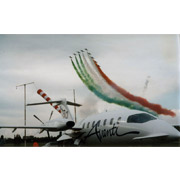 The P180 aircraft, flown by Piaggio Aero’s flight operatuions post holder Captain Lorenzo Villi, experimental test pilot, will perform an acrobatic flight demonstration alongside the Frecce Tricolori and next to the most prestigious air force acrobatic teams of Euorpe.
The Highest Italian Authorities and the Chiefs of Staff of all the Military Forces will participate to this event, for which more than 300.000 spectators are expected.

The taking part to an acrobatic exhibition has once again shown what exceptional performances the P180 Avanti is capable of. It is certainly the best turboprop aircraft in production today, the pride of the Italian Aeronautical Industry.

Apart from the exhibition, there will also be in Rome, on display only, many aicraft Piaggio Aero P166 and P180 Avanti from the Military Aviation .