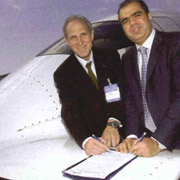 Marwan Atalla, Acting CEO of Saraya Private Aviation, said: "We are pleased to announce that Saraya Aviation has selected Piaggio Aero to provide us with P. 180 Avanti II, our choice was predominantly based on the requirements of our shareholders and customers. We did a careful analysis of current and future needs, and decided that the P.180 Avanti II is well suited for the purpose, as we are positive that it will comply with our high standards and expectations".

“We are delighted that Saraya Aviation has chosen six P.180 Avanti II for its incoming activity as a charter and aero taxi operator. The MENA region is a major developing hub for executive aircraft services, and we are glad to offer the fastest and most comfortable and efficient aircraft for corporate flights to Saraya travellers,” declared José Di Mase, Piaggio Aero CEO. “We have had extraordinary success in both the European and North American business aviation markets. Now we are starting to  explore new markets and the Middle East offers us very high potential for sales.”.

Furthermore, Saraya Private Aviation announced at Paris Air Show its partners in this latest venture; Saudi Oger, the Arab Bank Ltd., MEDGULF (the Mediterranean and Gulf Insurance and Reinsurance Company), Dubai International Capital (DIC), MUBADALA and Near East Group. Saraya Private Aviation is an Aircraft Charter Operator, designed at servicing its ever growing stakeholders, creating an exclusive option of executive flights; proving yet again their leadership in their fields of expertise by introducing a new, unique, and luxurious executive aircraft service for their customers, special travellers and businessmen.

This comes as a result of meeting the increasing needs and demands of today's world and leading the industry with added value services, eminent ideas and competitive edge services.

The six P.180 Avanti II were selected by Saraya Aviation over Piaggio Aero’s competitors thanks to their unmatched operational flexibility, cost efficiency and performance. The Piaggio Aero executive aircraft offers the speed of a light jet aircraft, the comfort of a large, quiet, midsize and real stand-up cabin, with fuel efficiencies that are nearly 40% higher than most business jets.

The P.180 Avanti II features the fully digital, automatic flight control and displays of the latest generation “Pro Line 21” avionics system, the most advanced on the market today. The maximum take-off weight (MTOW) of 12,100 lbs. gives the P.180 Avanti II greater payload range, and the introduction of the updated engines (P&WC PT6A-66B) provides higher performance, faster cruise speeds and more efficient operation, which makes the Avanti II the most up-to-date and fastest turboprop in production competing successfully in the light jet segment..


About Saraya Private  Aviation
Saraya Private Aviation, a Private Jet Charter Operation, is a subsidiary of Saraya Holdings Ltd. (A real estate development company investing in the MENA region in Travel and Tourism industries, established in 2005, with the vision of turning undiscovered natural, rich and unique locations into premium tourist resorts destinations).

Saraya Private Aviation, announced in May 2007 at EBACE, 'the European Business Aviation Convention and Exhibition’ in Switzerland, is designed at servicing individuals as well as large corporations, banks and government officials in addition to visitors, tourists and businessmen.

Piaggio Aero’s core product, the P.180 Avanti II, is the fastest and most advanced executive/multiutility turboprop in the world. Equipped with Rockwell Collins Pro-Line 21 avionics, the Avanti II has an endurance of over 1,500 nautical miles at a speed of 402 knots and a maximum cruising altitude of 41,000 feet. The P.180 is licensed to operate with a single pilot and can accommodate up to nine passengers. With 127 Avanti II aircraft currently in operation and a backlog of more than $600 million, the company remains committed to developing technology and innovative design solutions to drive current and future programs.