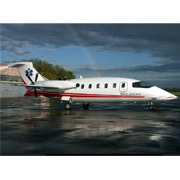 Atlanta GE, September 24 2007: Piaggio Aero Industries announced today a contract that calls for three P.180 Avanti II aircraft to be delivered to Sino Europe Aircraft Limited, the first Chinese customer for Piaggio Aero. The deal is worth more than $21 million.

Sino Europe Aircraft Limited is a company dedicated to representing and promoting aircraft from Europe. Through its association with Beijing PanAm International Aviation Academy, it will promote, operate and service Piaggio Aero P.180’s in the region.

The P180 Avanti II was selected over competitors thanks to its the state of the art avionics, enhanced performance and the lowest operating costs of any stand-up cabin aircraft.

“We have had extraordinary success in both the European and North American business aviation markets. Sino Europe represents the growing demand for our aircraft in new markets like the Far East” said Mr. Josè Di Mase Piaggio Aero CEO “We are extremely pleased that Sino Europe has selected the P.180 Avanti II. The Far East business aviation market is expanding rapidly and Piaggio Aero is excited to be participating in that growth.”

“ We contacted all major business aircraft manufactures and went through a year long comparison before coming to this decision” said Mr. Li ZhiYun Sino Europe Aircraft Managing Director “Thanks to its unique design and characteristics, we do feel Piaggio P-180 Avanti II is the most ideal aircraft for our applications".

The first P.180 Avanti II will be delivered in 2nd quarter of 2008 to China to join Government search and rescue operations.

The other two P.180 Avanti II will be delivered in 2009 to Beijing PanAm Aviation Academy, the first academy in China to adopt an advanced Euro-American style training syllabus, teaching and operation system and meets both CCAR Part 141 and CCAR Part 91 requirements (correspondents of the EU JAR and US FAR part 141 and 91). The aircraft will be used for training as well as operations under Part 135.

“We are proud that three new P.180 Avanti II will fly in China” commented Mr. Ugo Anatra Piaggio Aero Industries General Manager “Our new Chinese customers love the Avanti II. They take advantage to operate, a high performance aircraft equipped with a state of the arts avionic system and a pilot friendly cockpit. The Avanti II is also designed to achieve unparalleled performance in its class with its high speed, short field operation and high utilization efficiency which contribute to obtain the lowest operating costs”

The Piaggio Aero P.180 Avanti II ,EASA and FAA certified in 2006, is going to receive the Civil Aviation Authority of China certification before mid 2008.

The P.180 Avanti II is equipped with fully digital, automatic flight control and the latest generation Rockwell Collins “Pro Line 21” avionics system, the most advanced on the market today that provides the pilot with better situational awareness, resulting in even higher levels of safety, efficiency, flexibility and reliability.

The Italian-designed and built aircraft is certified for single pilot operation and seats up to nine passengers. Holder of numerous speed records, the P.180 Avanti II is capable of flying over 1,700 nautical miles at up to 402 kts and cruises at altitudes up to 41,000 ft.