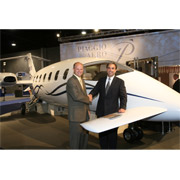 ATLANTA (September 30, 2007) - Piaggio Aero Industries and Avantair signed a milestone agreement today that calls for 22 Piaggio P.180 Avanti II aircraft to be delivered to Avantair starting in 2011 and continuing through 2012. The pending deal is worth more than $150 million. When the new order is completed, Avantair’s fleet will include 107 P.180 Avanti aircraft.

“This agreement is one of the largest sales in the history of Piaggio Aero,” said Josè Di Mase, Piaggio Aero Industries CEO. ”The demand for Avanti II aircraft continues to increase and this agreement will assure Avantair has a steady stream of aircraft for its fractional fleet through 2012.”

“Avantair’s choice of the Avanti II for this new order reaffirms the attractiveness of this aircraft for the growing fractional market,” said Eric Hinson, Piaggio America CEO. “We are excited to continue providing a sophisticated, fuel efficient aircraft for Avantair and build upon our long and successful partnership.”

“Avantair has experienced remarkable growth during the past two years,” said Steven Santo, CEO of Avantair. “Our commitment to the highest quality service and the competitive advantages of this wonderful aircraft have really created a strong demand in the fractional marketplace. We are proud to be the only fractional provider in the U.S. offering the Avanti II. Pending board approval, this order will help further the growth of our company.”

The P.180 Avanti II is equipped with fully digital, automatic flight control and the latest generation Rockwell Collins “Pro Line 21” avionics system, the most advanced on the market today. The system provides the pilot with better situational awareness, resulting in even higher levels of safety, efficiency, flexibility and reliability.

The P.180 Avanti II offers the most spacious and comfortable cabin in its class with features that can only be found in aircraft costing up to twice as much. The cabin is more than six feet wide and five feet nine inches tall. The cabin also sets new standards in quietness and smoothness. The P.180 Avanti II cabin is rated as low as 68 dbA speech interference level - quieter than any other business aircraft. The pusher engines direct sound toward the tail of the aircraft, leaving the P.180 Avanti II’s cabin virtually free of power plant noise.

The Italian-designed and built aircraft is certified for single pilot operation and seats up to nine passengers. Holder of numerous speed records, the P.180 Avanti II is capable of flying over 1,700 nautical miles at up to 402 kts. and cruises at altitudes up to 41,000 ft.