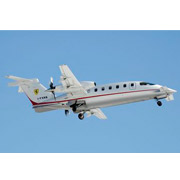 Piaggio Aero will display its P180 Avanti II executive aircraft at the First edition of  Singapore Airshow which takes place from the 18 to 24 February 2008 at the Changee Airport, Singapore.

The Singapore Airshow is Asia's largest aerospace event, and one of the top three air shows in the world serving as a global marketplace and networking platform for global aviation community (www.singaporeairshow.com)

Piaggio Aero will attend the show as affiliate of Mubadala Development Company Group and display the P.180 Avanti II in Ferrari livery on the static display. The Asian Market is going to be a primary potential market for the P.180, Piaggio Aero will deliver its first aircraft in China on the 2nd quarter of 2008 part of a bi deal for three aircraft ordered by Chinese Governement agencies worth more than 21 millions.

The link between Ferrari, Mubadala and Piaggio Aero is therefore stronger than ever: The world champion racing team flies the P.180 Avanti II the only aircraft in the world to proudly display on its livery the 'prancing horse’, Ferrari’s legendary trademark. The new F1 World Champion Kimi Raikkonen and Felipe Massa are both spokesperson for the Avanti II also in 2008 Formula 1 season.

The Piaggio Aero aircraft like Ferrari's cars represents the excellence and the world-wide success of the technological products made in Italy. Piaggio Aero and Ferrari are synonymous with success, efficiency, technology and unrivalled Italian design.