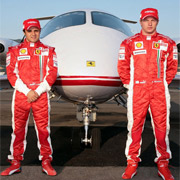 Genoa, March 12,2008 - Piaggio Aero Industries has signed a new sponsorship agreement with both Ferrari drivers: Felipe Massa and the World Champion Kimi Raikkonen have chosen to reconfirm Piaggio Aero and the P180 Avanti II aircraft for the upcoming 2008 season.

The Piaggio Aero logo (a stylised 'P’ drawn by the path of two aircraft in flight) will feature on the suits of both Maranello drivers, just as it did during the last, highly successful season.

“I am proud to have Piaggio Aero by my side once again, this logo brought us luck in last year’s triumphant season, just as Piero Ferrari predicted it would when he asked me to represent His aeronautical industry” Kimi Raikkonen declared. “I am only too pleased to wear the Piaggio Aero colours on my World Champion's suit once again, and am sure that it will bring us the same fortune we need this year, to keep on track"

Felipe Massa, testimonial and great fan of the P180 Avanti II aircraft stated just how happy he is about the new sponsorship agreement: “Flying with the P180 Avanti II, I was able to appreciate its extraordinary features, and am truly proud to continue representing it. Speed and high technology have always been my true passion: flight and the P180 Avanti II are an extraordinary example of this. I am very pleased that the Piaggio Aero logo is to remain on our suits, a winning symbol for the Formula 1 season that is about to take off”

Piero Ferrari, Vice Chairman of Ferrari S.p.A. decided, as Chairman of Piaggio Aero, to further investment in both Ferrari drivers “After the success of last season, how could  we not dress Kimi and Felipe in Piaggio Aero colours once again. Success in Formula 1, as in aeronautics, includes symbols and I am proud to see the Company’s logos to which I devote both my professional work and sport passion, head towards new aims of victory, hand in hand. We are proud to boast Felipe and Kimi, the new World Champion, as our representative, just as we are to know that the whole team flies and appreciates the P180 Avanti II. This gives great value to the Piaggio Aero image, and I wish Piaggio Aero continues to bring good luck to our drivers”.

The Piaggio Aero sponsorship of the Ferrari drivers flanks that of Mubadala Development, the strategic investments company of the Abu Dhabi government, a shareholder of Ferrari S.p.A. (5%) and Piaggio Aero Industries S.p.A. (35%). The agreements state that Piaggio Aero and Mubadala will flank Maranello Racing Team and its drivers for the whole 2008 season.

“It gives me great satisfaction to be able to combine our logo with both drivers of the team that has won the most in the history of Formula 1. We are proud to have these two extraordinary speed professionals providing a splendid representation of the Piaggio Aero image the world over” commented Alberto Galassi, Senior Board Member of Piaggio Aero, and responsible for promoting the new sponsorship deal. “I would thank Kimi and Felipe for having chosen Piaggio Aero to be their personal sponsor once again, thereby continuing to keep ties strong between our company and the Ferrari drivers, now a great joint success story".

The connection between Ferrari and Piaggio Aero remains strong: The Scuderia Ferrari flies with the P180 Avanti II, the only aircraft in the world over proud to bear the legendary ‘prancing horse’. The Piaggio Aero logo will feature greatly in Formula One thanks to Kimi Raikkonen, and Felipe Massa sure to be lead players in the upcoming season. Piaggio Aero and Ferrari together once again, on the circuits and in the skies of the world.