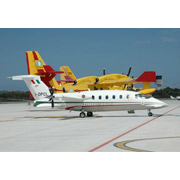 Piaggio Aero P180 Avanti II will be displayed at the air show which will take place on 19th April in Sardinia at the Olbia airport, in conclusion of S.Ar.Di.Ni.A 2008.

Sardinia 2008 falls within the programme of the activities set up by the Community Civil Protection Mechanism, as a peculiar initiative of the FIRE 5 European Trans-Boundary Cooperation Project.
The event plans simulations of fire extinguishing flight operations and other activities usually performed in case of emergency, with demonstrations of national and international aircrafts, in order to exercise and to verify the interoperability capability of the various teams within the co-ordination system.

All the planned activities envisage the active participation of the five Partner States of the FIRE 5 Project - Italy, France, Greece, Portugal and Spain - and the presence of many Observers coming from partner and associated countries of the Fire 5 Project, from other countries belonging to the European Union, to the European Economic Area, to the Balkans and to Euromed, and also from Agencies of the United Nations, of the Russian Federation and from Third Countries.

Piaggio Aero P180 in his multiutility configuration - transport and air ambulance version - will be displayed the air show on 19th April at Olbia airport in conclusion of the event. At the air show it shall be possible to closely observe equipment, vehicles and aircraft used for fire-fighting purposes, as well as products of the national aircraft industries which have been successful worldwide, and demonstrations of national and international aircrafts, which shall simulate fire extinguishing flight operations.

The Piaggio Aero’s aircraft, with his unobstructed space available stand up cabin, its unrivalled cross-section and the very low ambient noise levels, provides outstanding accessibility for patient loading, and its large cabin offers a work-friendly environment for medical staff to gain access for up to two patients on the well-proven Lifeport stretcher systems. Facilities for incubators and other medical equipment are also provided on board.