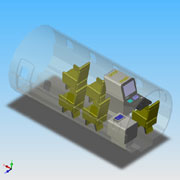 Piaggio Aero and the Italian Air Force have chosen the UNIFIS 3000 system designed and manufactured by NSM (Norwegian Special Mission) contracted to provide the state of the art Flight Inspection System for the P.180 Avanti including the comprehensive training program and long term service-maintenance contract inclusive of spares and support equipment. The contract is a landmark in the industrial co-operation in the aviation between Italy and Norway.

“The Italian Air Force is one of the most experienced users of the Piaggio P.180 Avanti and we are pleased that the IAF has chosen our multi-utility aircraft for the Flight Inspection Operations. This agreement marks another chapter in P.180 special mission development providing a state of the art aircraft equipped with the latest equipment for the essential flight inspection missions task undertaken successfully by the Air Force.” declared Mr.Josè Di Mase, Piaggio Aero CEO. “After an extensive evaluation process the P.180 has been selected as the future military flight Inspection unit thanks to its outstanding operational capabilities, implemented performance and cost effectiveness” he added.

The “Aeronautica Militare - 14th Stormo” will provide four P.180 Avanti aircraft of its fleet to be upgraded and prepared for the UNIFIS 3000. The flight inspection system for delivery to the Italian Air Force (the first P.180 “Flight Inspection” will be on service in 2010) is a comprehensive configuration with the latest and most modern technology available. The positioning system is a hybrid solution, it utilizes advanced image processing from a camera system, integrated with Inertial Reference Unit (IRU) and GPS. This gives the operator the full freedom to calibrate, with high accuracy and without the need for landing or any ground support equipment. The system is fully prepared to use DGPS and DRTT as back-up systems.

Following the Italian Air force - the inaugural customer for the P.180 Flight Inspection - other Government Agencies are expressing interest for the new P.180 special version. The P.180 equipped with the state of the art UNIFIS 3000 system will provide functionality to calibrate all civil and military Communication, Navigation and Surveillance (CNS) systems, including MLS and GPS based navigation. The operators will also take advantage from the unobstructed space available within the P.180’s stand up cabin area with its unrivalled cross-section.