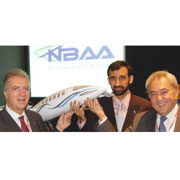 1st October 2008 - Genoa, Italy: - Piaggio Aero, today announced that Tata Limited has agreed to acquire approximately one third stake to become one of the primary shareholders, alongside Ferrari and di mase families and Mubadala Development Company.
Subject to approvals, Piaggio Aero Industries s.p.a. will be owned almost equally by the three co-primary shareholders.

Tata Limited, a U.K. based subsidiary of tata sons, has been representing tata sons in Europe since 1907. Tata sons, based in India, is the promoter of various Tata Companies which collectively had revenue of usd 62.5 billion during 2007-08 and employ around 350,000 people worldwide.

The proposed investment by Tata Limited consists of purchasing existing shares and new share capital subscription. Tata Limited will have three of the nine seats on the board of piaggio aero, and one of the three seats on the company’s executive management committee. The valuation and other financial terms of the investment are not disclosed.

The proposed investment is founded on a shared belief by Tata Limited and Piaggio Aero shareholders that the business aviation market will continue to expand significantly. The increased share capital will enable Piaggio Aero to harness market growth, expanding production rates and offering the P180 Avanti II to new markets. The industrial expertise residing within the Tata Companies will strengthen growth plans, which include establishing a strong market presence in india, where the government is targeting establishment of 500 fully operational airports by 2020, as compared to less than 100 at present.

“We are really honoured that Tata Limited has chosen to invest in Piaggio Aero Industries, becoming our co-primary shareholder. We are heavily engaged in strategic planning for the development of the company. Tata Limited’s involvement in our projects would be extremely gratifying and allow us to increase the success of recent years. The future for Piaggio Aero is bright and with the support of world-class investors and strategic partners like Mubadala Development Company and Tata Limited, I'm confident we can realize our full potential” said mr.Piero Ferrari, Piaggio Aero Industries chairman. “This milestone agreement gives Piaggio Aero a great opportunity to work closely with one of the leading companies in the world. We are confident that the company’s proposed new shareholding structure which now, with Tata Limited and Mubadala Development Company, would allow piaggio aero to execute its strategic development plan in a growing business environment”, he added.

“Piaggio Aero welcomes Tata Limited as the best possible strategic partner for the company” declared the Piaggio Aero CEO Josè di Mase “They are a highly ethical and selective investor and it would be an honor for Piaggio Aero to be a part of the their portfolio which includes some of the best companies in the world. Tata Limited has agreed to become a shareholder of Piaggio Aero to further participate in the growth of our company for which this agreement represents an important milestone. We look forward to what we know will be a proactive contribution coming to the company from Tata Limited that has expressed a great deal of confidence in the strategic direction we have established for the development of Piaggio Aero. This milestone agreement also offers the opportunity for Piaggio Aero to benefit from industrial expertise of the Tata Companies”, he added.

“Piaggio Aero would represent the first significant investment in Italy by Tata Limited. It would also be their first direct investment in an aircraft manufacturer; we are proud of this new partnership and honored for the confidence that has been expressed”, said Alberto Galassi board and executive committee member of Piaggio Aero. “Once again we are proudly expanding our partnerships: two of the most important international entities, Mubadala Development of Abu Dhabi and today Tata Limited have agreed to become shareholders of Piaggio Aero increasing our company’s strategic value. Tata Limited, along with Mubadala, shares Piaggio Aero’s commitment and long-term vision for growth and these strategic partnerships would really create enormous possibilities for Piaggio Aero’s development plans.“

Piaggio Aero Industries is the only company in the world to be active in all aspects of aircraft manufacture, aircraft maintenance, aero-engines production and aero-engines repair and overhaul. Piaggio Aero has delivered more than 160 P.180 Avanti-II aircraft to customers around the world including private owners, corporations, government institutions and fractional ownership companies. Since 1998 the company has grown its order book to its current order back-log of over 100 aircraft. The company’s total order book is currently valued at more than $700 million.