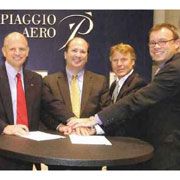 Orlando (October 6, 2008) – Piaggio America Inc. announced at NBAA 2008 a partnership with Landmark Aviation of Scottsdale, AZ to be one of its newest Authorized Service Centers for the Piaggio P.180 Avanti II aircraft.
Landmark will maintain, repair and overhaul all P.180 Avanti IIs located in the Southwest. Landmark is well known for its quality control in that every aircraft, every repair, and every job is inspected and re-inspected before it leaves the service center.
“We are committed to providing outstanding service and support to our customers,” said Piaggio America President and CEO Eric Hinson. “The addition of Landmark to our Authorized Service Center Network will improve our capability to support P.180 Avanti and Avanti II customers, particularly for those in the southwest United States and Mexico.”

Landmark Aviation is one of North America’s largest providers of comprehensive services for the business aviation industry. Serving 33 locations in North America, the company offers a full range of services including fixed base operations; maintenance, repair and overhaul; aircraft charter, sales and management. Landmark Aviation is headquartered in Winston-Salem, NC.