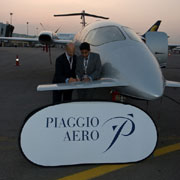 "The partnership with Taj Air marks another chapter in Piaggio Aero development plan in the new markets, commitment to providing first-class commercial network, experienced service centre and product support to our incoming operators in the area " says Giuliano Felten Piaggio Aero senior vice president marketing and sales “Today’s agreement confirm the commitment of Piaggio Aero to entertain a prioritise relationship with one of the most demanding market of the world allowing also us to well support the Avanti II fleet at the best level of expertise and efficiency meeting the expectations of our distinctive costumers”

“Taj Air is adding the Piaggio P180 Avanti II to continue to meet expectations of a very demanding customer in terms of comfort, speed, efficiency, and major city to a satellite city connection” said Mr. M. Kapadia Chairman of Taj Air “We are also convinced that by taking the distributorship of this innovative aircraft andand becoming the Piaggio Aero service centre, Avanti II operators will have a one stop shop for all their requirements, from buying to maintaining the plane within India and neighbouring countries” He added.

Taj Air is a Tata Company. Tata is a premier and large business conglomerate, synonymous with industrial development, entrepreneurial spirit and nation building for a century. The Tata’s pioneered aviation in India over 70 years ago.

The Piaggio Aero P.180 “Avanti II” version has been EASA and FAA certified in 2006, and expected to receive the Civil Aviation Authority of India certification within this month.

Piaggio Aero also announces at Indian Aviation 2008 contracts that calls for two P.180 Avanti II aircraft to be delivered in 2008 to the first Indian private operators.

The P180 Avanti II was selected over competitors by the first Indian costumers thanks to its unique Italian style, enhanced performance and the lowest operating costs of any stand-up cabin aircraft. Also, in today's ecologically sensitive world the Piaggio Avanti II is set apart from its competitors with its ability to achieve a high level of performance, with unrivalled fuel efficiency that means also low emissions and reduced operative costs.

The P180 Avanti II is a real Italian masterpiece which combines the exclusive elegance and unmatched comfort of the Made in Italy design with superior performance. With its record of excellence, the P180 Avanti II has been chosen by the “Scuderia Ferrari” to meet Ferrari racing team travel needs. The P.180 Avanti II is the only aircraft in the world allowed to proudly display on its livery the "prancing horse", the Ferrari’s legendary brand. Piaggio Aero is also a personal sponsor of the F1 World Champion Kimi Raikkonen and the Ferrari driver Felipe Massa. Both drivers carry the Piaggio Aero logo when competing at F1Grand Prix around the world.

The Avanti II offers the speed of a light jet aircraft, the comfort of a large, whisper quiet and real stand-up cabin, with fuel efficiencies that are nearly 40% higher than most business jets. The P.180 Avanti II features the fully digital, automatic flight control and displays of the latest generation “Pro Line 21” avionics system, the most advanced on the market today. The P.180 is single pilot certified and is able to carry on up to 9 passengers.

The maximum take-off weight (MTOW) of 12,100 lbs gives the P.180 Avanti II greater payload range, and the introduction of the updated engines (P&WC PT6A-66B) provides higher performance, faster cruise speed. The Piaggio Aero aircraft is able to operate out of smaller peripheral airports with landing and take-off distances that are simply unachievable in a comparably sized jet. The P.180 is able to fly at a maximum cruise speed of 402 kts, 745 km/h (MMO 0.70), the Avanti II is the first business turboprop to reach this significant speed milestone.

The Avanti II is the most up-to-date and fastest executive aircraft in production competing successfully in the light jet segment. It represents a real personal business lounge in the sky with its world class elegance and comfort combined with state-of-the-art technology. The Piaggio Aero aircraft, represented by Taj Air for the India, Nepal, Bhutan, Sri Lanka, Pakistan, Maldives and Mauritius offers best performance, more comfort and greater efficiency at a lower price than any other business aircraft available today.