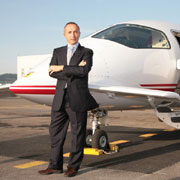 Genoa, February 3rd 2009. The Piaggio Aero Industries Shareholders’ Meeting has appointed a new Board of Directors which represents the three major shareholders: the Ferrari and Di Mase families, Mubadala Development Company – a strategic investment company fully owned by the Abu Dhabi Government - and Tata Limited - a British company which is part of the Tata Group. Each of the joint majority shareholders have appointed three of the nine members composing the new Board of Directors.

The Board confirmed Mr. Piero Ferrari as Chairman of Piaggio Aero Industries S.p.A. and appointed Mr. Alberto Galassi as the company's new CEO.

Alberto Galassi will replace José di Mase who has been CEO since 1998. Mr. Di Mase will however, continue on as member of both the Board of Directors and Executive Committee of Piaggio Aero Industries.

Alberto Galassi was born in Modena, Italy, in1964 and since the year 2000 has been a Piaggio Aero Industries Board Member responsible for Marketing and Sales and also a member of the companies Executive Committee. Mr.Galassi has played a crucial role in the company’s re-launch and subsequent international success of Piaggio Aero’s P180 Avanti aircraft, Engine Repair and Overhaul business and it’s Aero Engines production.
Mr. Galassi is one of the main promoters of the company’s international strategic partnerships and has been the main influence behind the inclusion of the shareholders Mubadala Development Company and Tata Limited.

“This is a very important time for Piaggio Aero Industries and today I would really like to thank José Di Mase” remarked Piero Ferrari Chairman of Piaggio Aero, “Thanks to Josè’s extraordinary work Piaggio Aero has enjoyed truly amazing results over the last decade, regaining a role of true protagonists of the world aviation industry. Our company will now benefit from the experience and skills of Alberto Galassi, supported by the whole Board of Directors, Company’s shareholders and all the people working in Piaggio Aero”.

"After ten years of work, I am truly proud of the important results obtained by Piaggio Aero in a sector as complex and highly competitive as the aviation industry can be” Mr. José Di Mase said “I am proud to have Alberto Galassi head of the Piaggio Aero Group. He has already contributed significantly to the creation of our international shareholder structure and to the commercial results we have obtained. Personally, I will continue to support Piaggio Aero in focusing to a greater degree on new development projects" he added.

“I’m proud to lead a company composed by some of the most important industrial and financial groups of the world and I am grateful to our shareholders for the trust they have demonstrated." declares the new CEO, Mr. Alberto Galassi. “Over the  years, our unique products have allowed Piaggio Aero to become one of the most authorative ambassadors of Italian high technology worldwide. We owe this success to the work of Josè Di Mase who,has competently guided Piaggio Aero with a true business spirit and a far-sighted approach. I am truly grateful to Josè for continuing to support us by working on the Board of Directors and Executive Committee.
With the continued support and contribution of our shareholders, our workers and our Piaggio Aero partners we can face new opportunities and challenges with the confidence to overcome all eventualities including those posed by the current state of the world economy” he added.