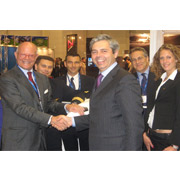 With the agreement signed with Piaggio Aero Industries at the EBACE. Three are now the number of aircraft for BPA’s executive service.

Executive Blue, Blue Panorama’s branch for executive flights, has increased the number of Piaggio P180 Avanti aircraft in its fleet to three. At the European Business Aviation Conference & Exhibition (EBACE) in Geneva an agreement was signed between the chairman of Blue Panorama Airlines Franco Pecci and Giuliano Felten, Deputy General Manager and Vice President Marketing & Sales Piaggio Aero. The  agreement is for an additional two P180 Avanti II aircraft. These are additions to the fleet that have been in service since 2004

The new contract represents an important growth for the Executive Blue division. Based at the Rome’s Ciampino Airport, Blue Panorama expands the company's market segment to the arena of select business aviation in the wake of the positive results obtained so far in terms of hours flown.

"It’s has been five years already that we have focused on the great potential of the P180. Due to its versatility, low operational costs and high performance the P180 allows us to enter as a consolidated leisure company, in the medium and long haul sectors and even in the executive flight business, declared Franco Pecci – Chairman of Blue Panorama. “Together, with the opening of a commercial office at Rome’s airport and leading to the leasing of two additional P180’s, takes our activities in the direction of continued development in the executive segment with an increased level of rotations and better fleet utilization, now reinforced”.

"We are extremely pleased that Blue Panorama has chosen the two additional P.180 Avanti for enhancing their fleet of aircraft that are dedicated to the executive transport sector. It’s a clear sign of the satisfaction found among the selective customers of "Executive Blue" on the Piaggio Aero aircraft operated by Blue Panorama since 2004. It makes us particularly proud that this agreement confirms and extends the partnership between two prestigious Italian companies, ambassadors all over the world, of high exclusivity products and services.”. Commented Giuliano Felten, Piaggio Aero Deputy General Manager.