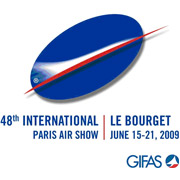 Piaggio Aero P180 Avanti II will be displayed at the 48th International Paris Air Show that will take place from 15 to 21 June 2009 at Le Bourget Airport and Exibition Center - France. Almost 2.000 exhibitors will be present and over 200.000 visitors are expected to attend this traditional event which this year has special significance as it celebrates its 100th anniversary (the first Paris Air Show was held in 1909 in the city’s Grand Palais). At Piaggio Aero Booth no. D*1A512 the visitors will be able to discover the Piaggio Aero P.180 Avanti II, the only business aircraft with the speed of a jet and the economics of a turboprop. In terms of outright fuel efficiency, lowering operating costs without sacrificing performance or environmental responsibility and less fuel burn means lower carbon emissions. That's good for the environment. When it comes to green, no other plane save so much.