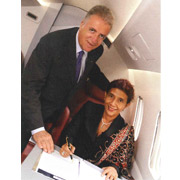 Susi Air is a scheduled and charter airline based in Pangandaran, West Java, Indonesia. The company currently operates from 4 main bases across the Indonesian archipelago.
Established in late 2004 by husband and wife team Christian von Strombeck and Susi Pudjiastuti, it was originally setup to transport the fisheries cargo of sister company PT ASI Pudjiastuti.

During the 2004 Indian Ocean earthquake triggered devastating Tsunami's along the Western coast of Sumatra and the Susi Air aircraft were very quickly pressed into service transporting equipment and medicine for aid agencies. Since that time Susi Air expanded its fleet an operation. With 16 turboprop aircraft currently in operation Susi Air is become the largest private operator in Indonesia .
In addition to the executive services Susi Air launched scheduled flights (the company plans for 100,000 passengers in 2009) survey services, freight services  and flight training center in Pangandaran as the first step to establish a world class flight training centre in Indonesia.

Susy Air will provide also a Med Evac and sanitary transportation service. P.180 Avanti II will be equipped with an “Ambulance Kit,” that, through a quick reconfiguration, allows the aircraft to become an efficient air ambulance unit. The Avanti II provides outstanding accessibility for patient loading, and its large cabin offers a work-friendly environment for medical staff to gain.

Susi Pudjiastuti, founder, President and Director of Susi Air declared: "We are pleased to announce that Susi Air has selected the P.180 Avanti II. Our choice was predominantly based on the requirements of our customer. The Piaggio Aero aircraft  will allow us to enter new and longer routes and offer our VIP costumers a new option at the lowest possible cost. We are proud to welcome in our fleet the first upper segment aircraft which will comply with our costumers’ expectations in terms of comfort thanks to its remarkably spacious cabin. Considering its unique design and characteristics, we do feel Piaggio Aero P.180 Avanti II is the most ideal aircraft for all of our different applications " She declared. “Indonesia still has strong economic growth and regional centres are becoming more important for business, requiring more travel by business and government in a country larger than Europe. From Jakarta the P.180 Avanti II can reach 90% of Indonesia’s population non-stop and even the longest distance of 3.800 km to the farthest islands can be flown with one quick fuel stop. ”Mrs Pudjiastuti Added.


“We are delighted that Susi Air has chosen the P.180 Avanti II for VIP charter and Med-Evac operations. Indonesia is a developing hub for many aircraft services, and we are glad to offer the fastest and most comfortable and efficient aircraft for Susi Air’s activity in that region” declared Alberto Galassi, Piaggio Aero CEO. ”We know that The P.180 Avanti II was selected by Susi Air thanks to its unmatched operational flexibility, cost efficiency and performance and also because it is most environmentally friendly airplane in business aviation”

The Piaggio Aero P.180 Avanti II offers the speed of a light jet aircraft, the comfort of a large, quiet, midsize and real stand-up cabin, with fuel efficiencies that are nearly 40% higher than most business jets. Additionally because of the aircraft's excellent takeoff and landing performance and perfect pressurization, the Piaggio Aero P180 Avanti II is one of the most widely used aircraft for public services such as an air ambulance and air rescue. The P.180 Avanti II features the fully digital, automatic flight control and displays of the latest generation “Pro Line 21” avionics system, the most advanced on the market today.

The Italian-designed and built aircraft is certified for single pilot operation and seats up to nine passengers. Holder of numerous speed records, the P.180 Avanti II is capable of flying over 1,700 nautical miles at up to 402 kts. and cruises at altitudes up to 41,000 ft.
The Piaggio Aero P180 Avanti II can rightly be called the "green aircraft". It's the most environmentally friendly airplane in business aviation because it uses 40% less fuel than equivalently sized jets.

With 186 Piaggio Aero P.180 Avanti and Avanti II aircraft currently in operation and a backlog of more than $626 million, the company remains committed to developing technology and innovative design solutions to drive current and future programs