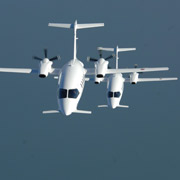 Le Bourget 15th June 2009 : Piaggio Aero has announced today at the Paris Air Show that the United Arab Emirates (U.A.E.) Air Force and Air Defense has selected the P180 Avanti II aircraft as part of the expansion program of its fleet which includes the acquisition of two light multi-utility aircraft.

The P.180 Avanti II has been chosen by the UAE Air Force and Air Defense following an extensive evaluation process that took into consideration characteristics and performance of several aircraft in the same class as well as, reliability, cost effectiveness and operational flexibility.

Upon the announcement of the selection Piaggio Aero CEO Mr. Alberto Galassi commented: "The selection of the P.180 Avanti II by the United Arab Emirates Air Force and Air Defence represents a huge success for the Italian high-tech industry. It is also an endorsement of considerable value for Piaggio Aero as it confirms the value of the P.180 Avanti II aircraft as advanced multi-utility aircraft. ”He went on to say “The UAE Air Force’s selection of the Avanti II confirms the commitment of Piaggio Aero to maintain a priority relationship with one of the most important and selective markets in the world. Our company has taken the decision to invest in the development of special multipurpose configurations and the preference of the UAE Air Force and Air Defense provides a positive outcome for our investment”, Mr. Galassi added.

The P.180 Avanti II has been found by the UAE Air Force as the ideal aircraft to support the diversity of missions in the Gulf Region:

-    Fast transportation of specialized staff, a primary necessity for tactical and  technical coordination

-    Medical Evacuation and fast sanitary transportation of patients, with the possibility of checking on the patient’s conditions during the transfer as well as giving efficient first aid assistance.

In order to meet this requirement, the 2 P.180 Avanti II aircraft will be equipped with an “Ambulance Kit,” that, through a quick reconfiguration, allows the aircraft to become an efficient air ambulance unit. The Avanti II provides outstanding accessibility for patient loading, and its spacious cabin offers a work-friendly environment for medical staff.


“We are proud to have been selected by the UAE Air Force and are certain that the P.180 Avanti II will bring an important contribution to their activities.” Commented Piaggio Aero Deputy General Manager Giuliano Felten. “The UAE market also offers a strong potential for this aircraft for charter, corporate and private operators all who are looking for outstanding performance and comfort. The P180 Avanti II defines its own class in today’s aircraft marketplace. We are very confident that with the Avanti II, Piaggio Aero has a benchmark aircraft that will continue to attract a great deal of attention in the UAE and in the whole Gulf area” He added

The Piaggio P180 Avanti II is a twin turboprop pressurized aircraft with 3 lifting surfaces, able to carry up to 7 passengers and 2 pilots and certified for single pilot operations. The P.180 Avanti II is equipped with a fully digital, automatic flight control and displays the latest generation “Pro Line 21” avionics system, the most advanced on the market today. The Piaggio Aero aircraft is licensed to operate with a single pilot and can accommodate up to nine passengers.

Piaggio Aero’s aircraft has range of over 1.500 miles, a maximum speed of 402 kts and is able to reach an altitude of 41.000 ft: these performances can be compared to those of a turbojet aircraft, however the Piaggio Avanti II’s operating costs are at least 33% lower. It is also equipped with an enormous, stand up cabin which, together with its flexibility of use and multiplicity of installed equipment satisfies the variety of the UAE Air Force’s needs.

With 183 Piaggio Aero P.180 Avanti and Avanti II aircraft currently in operation and a backlog of more than $626 million, the company remains committed to developing technology and innovative design solutions to drive current and future programs