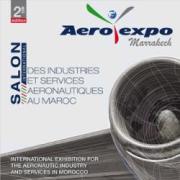 Piaggio Aero participates for the first time at  AEROEXPO Marrakech 2010 the International Exhibition for The Aeronautic Industriy and Services in Morocco  that will be held from the 27th to 30th October 2010 in Marrakech at Menara Airport..
AEROEXPO is considered as one of the most important air show in northern Africa. More than 185 companies from 15 countries participate to the 2010 edition  exhibiting the latest in the fields of civil and military air transportation industries. many civil and military delegations have been invited to Aeroexpo 2010 and witnessing about 40 000 visitors, 40 delegations and diplomatic authorities of many countries are expected.

Piaggio Aero will display its P180 Avanti II aircraft.
The Piaggio Aero P.180 Avanti  II is the only aircraft with the performances  of a jet and the economics of a turboprop. In terms of outright fuel efficiency, lowering operating costs without sacrificing performance or environmental responsibility and less fuel burn means lower carbon emissions. The  P.180 Avanti II  is the only aircraft perfect engineered that maximum performance actually create maximum savings.
The P180 can be configured in two ways as an air ambulance; either with five medical crew and one stretcher, or three medical crew and two stretchers. For EMS purposes, a corporate version of the aircraft can be changed to an air ambulance in less than two hours, demonstrating the flexibility of the aircraft to offer more than one solution to a company. Typically, the P180 is equipped with medical equipment that includes one or two stretchers; an oxygen bottle with pressure regulator; a vacuum pump; a compressor with pressure accumulator and a power supply for the medical equipment.
The P.180 Avanti II   could be configured in  the Flight Inspection version  to ensure in-flight monitoring of radio assistance for routes and airports in order to validate the accuracy of the indications provided and compliance with international rules.
The P.180 Avanti II could also be configured for law enforcement and surveillance becoming an efficient platform for territorial multifunctional surveillance using a Forward Looking Infra Red (FLIR) television camera system. FLIR technology is the most effective for territory surveillance activities to monitor.


Additional information on AEROEXPO 2010 is available online at  www.aeroexpo-morocco.com/